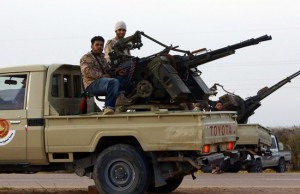 Four security personnel were killed and three others injured Sunday in an attack by Islamic State (IS) affiliated militants in Libya’s western city of Misrata, Xinhua news agency reported.

A source from Misrata’s local council said the militants attacked the Abu-Grin gate in Misrata in two vehicles before fleeing.

Misrata has been targeted several times by IS affiliates.

An IS affiliate claimed responsibility for Sunday’s attack on Twitter and identified the bomber as a Tunisian national.