You are here: Home / Africa / Four killed in suicide bombing at mosque in northern Cameroon 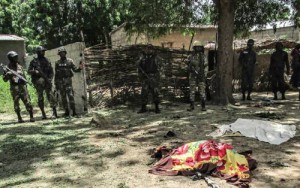 The attack occurred in the village of Nguetchewe. Cameroonian officials confirmed the death toll to media sources.

The terrorist group Boko Haram is believed responsible for the attack.

The attack comes just days after a previous attack in Cameroon left 12 people dead.  According to security sources, the bombing took place around 6:00 A.M. just as the morning prayers were ending.

The suicide bomber was believed to be a young boy, who ran towards the mosque and then set off the explosives he was carrying on his person.

Cameroon has been hit by numerous attacks by Boko Haram in recent weeks largely in response to their role in the regional joint task force which has been fighting the terrorist group.