You are here: Home / Africa / Four killed in Mali attack blamed on Jihadists 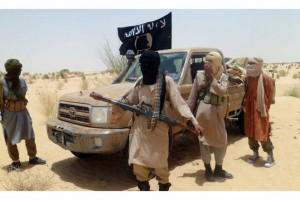 The victims were killed yesterday “by armed Islamists in the village of Bih”, about five kilometres (three miles) from the Burkinabe border, a provincial police official said, speaking on condition of anonymity. The official said the gunmen were travelling on motorcycle.

One of the policemen and one of the civilians died immediately as a result of the shooting, and the other two victims died of their injuries soon after, according to a Malian security source.

The source said the attackers were members of Macina Liberation Front (FLM), a new group that emerged earlier this year and has claimed responsibility for a number of attacks, some targeting security forces in central Mali.

The FLM draws its support from the Fulani people of central Mali, and is also linked to Ansar Dine — Arabic for “defenders of the faith” — one of the groups that took control of Mali’s vast arid north in April 2012.

According to the Malian security source, authorities were investigating whether the FLM maintained a rear base in nearby Burkina Faso.

Mali was shaken by a coup in 2012 that cleared the way for Tuareg separatists to seize towns and cities of the north, an expanse of desert the size of Texas.

Al-Qaeda-linked militants then overpowered the Tuareg, taking control of the region for nearly 10 months until they were ousted in a French-led military offensive.

The vast desert region is now controlled by a patchwork of armed groups, loyal to the government or the Tuareg-led former rebels.