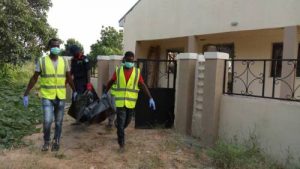 Four suicide bombers were killed in a fail attempt to wreak havoc on Maiduguri residents on Wednesday night, an eyewitness told Saharareporters.

According to an eyewitness account,  all the bombers were teens and wore new set of clothes to avoid detection.

“We were at our duty place, suddenly we heard a very loud explosion, I quickly climb the fence while on the fence I put on the touch light and spotted three of them standing behind the fence so I raised alarm; then second bomber blew up herself.

He added ” the third also attacked the deserted mosque in Ummarari, there no civilian casualties, however,  State Emergency Management Agency team came to evacuate the bodies of the bombers early morning on Thursday.

Molai general area has suffered a series of suicide attacks in the recent times led to the death of  dozens of civilians.