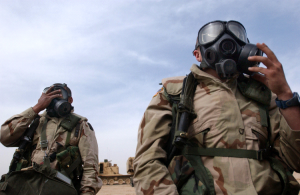 The Chancellor of the Kurdistan Region Security Council (KRSC) Masrour Barzani has revealed that Islamic State (IS) has launched four separate chemical attacks against the Peshmerga .

Barzani tweeted on his official account on 21st September that more than 1,300 Kurdish Peshmerga have so far been killed in the war against IS.

He revealed that the majority of Peshmerga casualties are as a result of improvised explosive devices (IED) and mines. “The global coalition must provide more aid,” the Kurdish official urged.

He pointed out that IS insurgents have used chemical substances to attack the Peshmerga in four different areas to date.

With international organisations confirming that the jihadist group recently carried out several chemical attacks against Kurdish forces, Barzani warns that the Peshmerga have so far received only 1,000 gas masks.

IS has being fighting Kurdish forces in northern Iraq and Syria since the middle of 2014, and the use of chemical weapons has become more prevalent this year.