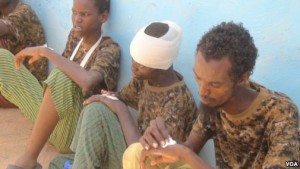 Four militants of the Islamic State have been arrested by Somali security forces during operation in the southwestern town of Baidoa.

Mohamed Iska Aflow, Southwest Administration’s head of intelligence and security agency, told journalists late on Friday that the group’s commander in Bay and Bakool regions is among those arrested alongside his three collaborators.

He said the detained leader was in charge of IS’s terror operations in Bay region of southern Somalia.

“Mahad Nuh Sidow, Abdiasis Hassan Mural and Mohamed Sheikh Isak were dispatched to terrorize and carry out bomb attacks in this regional state, we successfully held them and we are displaying them to the media at the moment,” Aflow added.

The arrest comes a day after the United States added Abdulkadir Mumin, the Somali IS leader, to the terror list in East Africa.