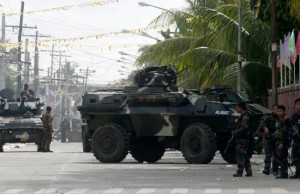 Three Muslim militants and a soldier were killed in the southern Philippines Thursday when government troops raided a bomb factory of an Al-Qaeda-linked group, a military official said.

Three of the gunmen and one soldier were killed in the battle, which forced the Abu Sayyaf to retreat, leaving behind them bomb-making paraphernalia, Trinidad said.

“Various types of IEDs (improvised explosive devices) were recovered that were already assembled. Some were made of LPG (liquefied petroleum gas) tanks, paint tins and pipe bombs,” he said.

Founded in the 1990s with seed money from Osama bin Laden’s Al-Qaeda network, the Abu Sayyaf gained international notoriety for the worst militant attacks in Philippine history including bombings and kidnapping Christians and foreigners for ransom.

This includes the 2004 firebombing of a ferry off Manila Bay that killed more than 100 people.

Despite receiving training assistance from the United States, the Philippines has struggled to contain the Abu Sayyaf, whose leader last year pledged allegiance to ISIS.