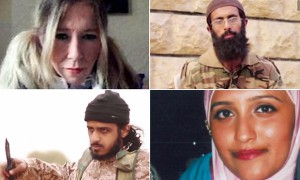 The United Nations has imposed sanctions on four British citizens who are fighting with Islamic State militants in Syria, following a request from the British government.

The UN’s updated sanctions list named the two men and two women as Omar Hussain, Nasser Muthana, Aqsa Mahmood and Sally Anne Jones, who will now face a travel ban and a freeze on their assets for their role in fighting and recruiting others to join Islamic State via social media.

The move marks the first time in 10 years that Britain has submitted names to the UN’s sanctions list and is designed to deter Britons from traveling to Syria or Iraq to join militant groups.

“The prime minister has been absolutely clear that we will do all we can to stop British citizens from going to fight for ISIL and that foreign fighters should face consequences for their actions,” a Downing Street spokesman said.

“It sends a clear deterrent message to those thinking of going to fight for ISIL. We will continue to consider whether more individuals should be subjected to these sanctions.”

Britain estimates that more than 700 Britons have traveled to Syria, with a significant proportion thought to have joined Islamic State, which has taken over vast areas of the country and neighboring Iraq.

The government spokesman said those who had been added to the list were actively seeking to recruit others to Islamic State and using social media to promote activity online, including providing guidance on how to make homemade bombs.