You are here: Home / MidEastGulf / Forty rebels surrender to Assad forces in Syria 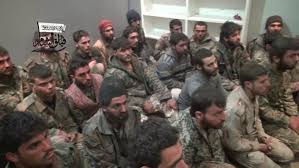 Forty rebel militants surrendered to the Syrian army after a 72-hour cease-fire was brokered, Lebanon’s The Daily Star reported on Friday.

The surrender came as a part of the agreement in the ceasefire brokered between Hezbollah and Syrian forces and rebel factions fighting in the Syrian border town of Zabadani, a security source told The Daily Star.