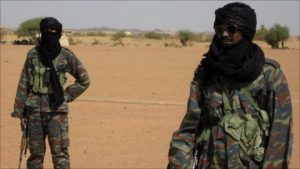 Malian soldiers and former Tuareg rebels have staged their first joint patrol in northern Mali, a key step in a 2015 peace agreement meant to help calm a region under threat from multiple extremist and other armed groups, like reported by ap.org.

As helicopters with the U.N. peacekeeping mission hovered overhead last week, 50 men in distinctive blue turbans started to patrol the city of Gao, a target of attacks by Islamic extremists including one in January that killed 54.

The joint battalion of some 600 people is the first to formally combine Malian soldiers with the rebels from armed independent groups of the Azawad region that signed the peace deal. The patrols are aimed at “building confidence and curtailing insecurity in northern Mali pending the full restoration of state authority,” the spokesman for the U.N. secretary-general, Stephane Dujarric, said Friday.

The new units face the challenge of securing the vast region and unearthing hidden extremists. They must also get along in the process, as the Tuaregs’ quest for autonomy has been a source of conflict for decades with the government.

“Today, it’s not a question of the Coordination of the Movements of Azawad (former Tuareg rebellion group) or the Malian army. We fight together all under the same flag: the green, the yellow and the red,” said Hassan Ag Ibrahim, a young Tuareg fighter who was patrolling on foot alongside a Malian soldier.

Northern Mali has been tense since 2012, when Islamic extremists linked to al-Qaida took over the region, exploiting a power vacuum after mutinous soldiers overthrew the president. French-backed forces pushed the extremists from strongholds the following year, but attacks have continued and have pushed further south. The U.N. mission in Mali is the deadliest active peacekeeping mission in the world.

More recently, extremists have issued statements threatening Tuareg and Arab families in northern Mali about participating in the new joint operation, and they have followed through on the threats.

On Jan. 18, a suicide bomber drove an explosives-laden vehicle into a military camp in Gao, killing at least 54 people and injuring more than 100 others. A group linked to al-Qaida’s North Africa branch, al-Mourabitoun, claimed responsibility and warned of more to come to punish “all who were lured by France.”

But those backing the new joint patrol, and some residents of Gao, remain committed to the task.

Mohamed Maiga, a resident, said he hoped the joint patrol will bring peace.

“They must continue their patrols of this type so that terrorists and armed bandits stop attacks and robberies,” he said.

Addressing concerns about security risks in the joint patrols, Daniel Massamba, spokesman for the U.N. mission, said the former rebels “have been identified and investigated to be sure they are not members of an infiltrated jihadist group.”

Col. Rhissa Ag Sidi Mohammed, a Tuareg within the military and coordinator for the patrol, said the rebels who joined the force have received the necessary training.

Now that joint patrols have begun, they will spread to other areas. In the coming weeks, units will be deployed to Kidal and Taoudenit, according Col. Mohamed Ould Hassan, an officer and former Tuareg rebel.