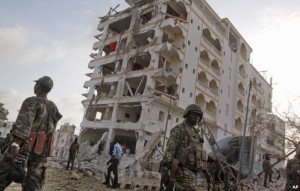 Many people, including Somalia’s former director of national intelligence Ahmed Moallim Fiqi, are questioning the capacity of the Somali government to prevent incidents like this week’s deadly attack by al-Shabab militants at a popular Mogadishu hotel.

Fiqi accuses the country’s security forces of taking their eyes off the ball.

“On the part of our troops, even if they are working hard, their strategy is not institutional; their priority is mostly to protect the group in power. They are losing focus in the fight [against Al-Shabab].”

Fiqi told VOA’s Somali service the militant group is changing its strategy because “their leadership and strength was spread across the country before; but now they have lost those towns and territories, which has given them the opportunity to come together in small areas to unite their leadership and power.”

He said this has allowed the group to carry out specific planned attacks on selective targets such as recent hotel attacks. They have also recently overrun three African Union peacekeepers’ bases and detonated a bomb on the grounds of Somalia’s presidential palace.

Somali Security Minister Abdirizak Omar Mohamed told VOA the attackers, all of whom were killed by security forces, were aiming at inflicting heavy casualties to the hotel residents, but Somali security forces were able to intervene early enough to prevent it from happening.”

The minister also said the only way they can prevent such events from happening in the future would be to enhance their intelligence capabilities.
At least 15 people were killed in Sunday’s attack on Sahafi hotel including a former army commander, a member of parliament, and a businessman.