You are here: Home / MidEastGulf / Former French soldiers are fighting in the ranks of Peshmerga against Islamic State 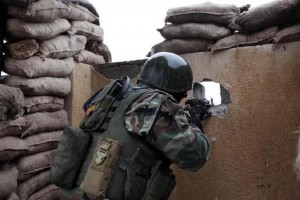 A group of former French soldiers, decided in a personal initiative to join the ranks of Peshmerga fighters who are fighting the “Islamic state” in Iraq, along with a number

of foreign fighters as revealed by a number of French media last week. What are motives that made them take up arms again in one of the most dangerous battlefields in the world with Peshmerga fighters?

In a Personal initiative, a number of former French soldiers decided to join the ranks of Peshmerga forces in Iraq in its war against the “Islamic state.” Group and assume the name , Lafayette Task Force ” in relation to the French battalion that fought the Taliban in Afghanistan from 2009 to 2012 , as revealed by a number of French media last week.

The Age of members of this group ranges between 25 and 55 all of them worked in war zones, whether in Iraq or Afghanistan or even in operations against pirates in Somalia and come from different French regions, as they belong to the infantry army or air force, and some of the foreign soldiers who fought alongside French troops .

These French soldiers announced that they are putting their military experience at the service of the Kurdish fighters to benefit of them through technical training and other related military plans, according to what was reported to “Le Figaro” French newspaper as the source preferred to remain anonymous and was behind this initiative.

Who is behind this move?

“Le Figaro” Newspaper said in the statement that one of the soldiers said that the motivation behind his involvement in the operation is back to his years in the French army, who reported that he took a look at videos of jihadists before the announcement of the establishment of the “Islamic State” that carry a lot of crimes, that was moment where he decided “not to remain to stand still,” he said.

The idea of ​​the subject of fighting extremists stayed in his mind as he said ,  among the coterie of his colleagues to June 2015 the date of the embodiment of “their project” on the ground, that’s when he met one of those who finished military service, and was in Iraq in the framework of a humanitarian mission in Kurdistan and met an official on a Kurdish military unit consisting of 120 soldiers.

This former French soldier continues, which does not exceed 25-year-old, that the debate with the Kurdish military official was across the social networking site Facebook in the beginning, talked about all aspects of the terms of cooperation between them and raised through everything related to the experience of former French soldiers, and how to enroll .

The French soldier simplified to the Kurdish official , the matter of this move where he considered that , “his country is targeted, in view of what happened from the terrorist attacks in France, and that these former French soldiers want to tell the world that their citizens are as these French jihadists who joined the ” Islamic state ” organization totaling Between 1000 and 1200, according to his estimates.

Is there any political or religious backgrounds of the group?

Another soldier told the daily “Le Figaro” said that these former soldiers are “not motivated by any religious or political motives,” adding that the group is composed of “Christians , Jews, Muslims and atheists,” as “among the volunteers, there are parents who will leave their children behind them.”

some of them would give up his work for a period of time in the context of a holiday without payment , but more than that, some of them will resign from his job “for full-time to the task,” which may extend for several months.

The group launched a campaign on the Internet to raise funds to cover the expenses of its mission, and in a few days, as seen by France 24, the group collected more than 25 thousand euros, and the enrollment to this task were many requests.

Three of the group have moved in the first stage to Kurdistan to prepare to receive the rest of the soldiers in the coming weeks. And there is nothing in French law that prevents them from fighting outside French territory, but starting in 2013, a law was passed that prevents it if there was money to be paid in return, while those stress that they carry out their mission as volunteers.

Why did chose to support the Kurds of Iraq?

About choosing these former French soldiers for Kurdistan instead of Syria to participate in the war against the “Islamic State”, Baraa Mikhail, a researcher in the Middle East issues at the University of San Luis in Madrid claims that “France has an excellent relationship with the Kurds of Iraq for a long time ago, This helped in the development of joint axes of cooperation. ”

Mikhail told France 24 that Paris cooperate with the Kurds of Iraq due to “their abilities and their knowledge of the geography of their region”, while “the Iraqi Kurds seek from a country like France to  participate in its strategy against the” Islamic State “,” thinking that their reward may come one day by defending Kurdistan’s privacy politically and administratively and even supports this idea through the United Nations, for example. ”

A Government under the pressure of public opinion

It seems that the French government today found itself under great pressure of public opinion to push in the direction of a ground war against the “Islamic state”, as confirmed by the recent opinion poll conducted by “Le Journal du Dimanche newspaper “.

In this context, the researcher and expert, Mikhail said that “French public opinion may affect the position of the French government about the” Islamic state and the Syrian file in practical, but is based on the considerations and calculations related to political considerations Without question the flow of refugees to the European Union , France has decided to reverse its previous official policy in that matter or at least not so rapidly and hasty as France want to prove that it is effective through its desire to play in the adult Circuit US-led “.

He explains the transformation that began in a group of Western attitudes for the fact that “most of them believed till now that the” Islamic state “may help to weaken the Syrian regime, like many of the extremist groups, but this theory turned on them, especially in the circumstance in which the Russian explicit game was modified in the Syrian arena. “