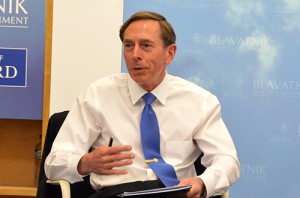 In warning the Obama administration against warming ties with Iran as a way to defeat ISIS, Israeli Prime Minister Binyamin Netanyahu took issue with what he saw as an emerging policy based off of the adage “my enemy’s enemy is my friend.”

“Iran is the Islamic Republic, and ISIS calls itself the Islamic State,” the Prime Minister said in March of this year. “In this case, the enemy of my enemy is not my friend, but my enemy.”

But that strategy could go arguably a step further, if former CIA Director David Petraeus has his way.

According to the Daily Beast, the former commander of US forces in Iraq and Afghanistan has been lobbying White House officials to embrace “moderate” elements of another major US foe: Al Qaeda.

ISIS famously broke of from Al Qaeda in 2014, after months of discord between ISIS leader Abu Bakr al-Baghdadi and Al Qaeda chief Ayman al-Zawahiri. The rival jihadi groups have since engaged in bloody fighting in Syria, where Al Qaeda’s Syrian branch, Al Nusra Front, has emerged as one of the most prominent rebel forces in the war against the Assad regime.

Patraeus is reportedly urging officials to reach out to elements within Nusra who are more “moderate” and help them defeat ISIS. In doing so he seems to be drawing a distinction between elements with the more locally-focused goal of overthrowing the Assad regime, and those looking to establish a base from which to attack the west, including the United States.

It comes as the US and its allies have struggled to find a solution to ISIS, helping to roll it back in some areas via an air campaign but failing thusfar to present a convincing plan for a decisive victory.

Patraeus’s plan is apparently drawing from his experience as commander in Iraq, where formerly hostile Sunni factions allied with US forces to defeat their common enemy – ISIS’s previous incarnation, Al Qaeda in Iraq. That strategy brought the jihadis to the brink of extinction, but critics will note that in the long-run, ISIS still emerged on top, today controlling the very areas which once served as strongholds for the US Army’s Sunni tribal allies.

But the plan is extremely controversial for other reasons as ell. Apart from the fact that both groups are proscribed terrorist organizations in the US, it is unclear whether such a distinction within Nusra’s ranks really exists on any meaningful level. Moreover, it is Al Qaeda, not ISIS which has carried out the bloodiest and most infamous terrorist attacks on US soil, most notably the 9/11 atrocity.

Unnamed US officials told the Daily Beast that while “direct links” with Nusra are “off the table,” they would not rule out working with other groups aligned with them.

Apart from anything else, however, it is far from clear that there would be any takers on the Syrian side, as there would be seemingly little to gain from allying with a lukewarm US administration with a track record of failing to provide sufficient support for its allies on the ground.

As one intelligence official said: “Groups that try to cater to both hardliners and the West could find themselves without any friends, having distanced themselves from groups like al Qaeda but still viewed as extremists by the moderate opposition and their supporters.”