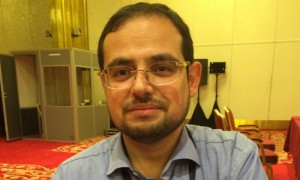 Aimen Dean is an unusual example of a poacher turned gamekeeper. The talkative Bahraini is sought after for his understanding of the Islamic State, now expanding across Syria and Iraq in a campaign the US has warned could take decades to defeat. Dean’s insights are based on his own experience as an al-Qaida terrorist – but one who underwent a crisis of conscience and changed tack to spy for British intelligence.

With his neat haircut, dark suit and gold-rimmed glasses, Dean – not his real name – looked at ease amongst the academics and security policy wonks debating strategies for countering violent extremism at a conference in Qatar this week. But his years in the jihadi world – and his extraordinary journey out of it – inform his view of how to combat Isis, which is attracting thousands of young Muslims from across the world to its “Caliphate” in the heart of the Middle East.

“The first thing is to realise the magnitude of the problem,” he says. “It is deep and difficult. The idea that there a magic solution to convince these people just to turn around and come back and be good citizens is almost impossible. It is ludicrous.” Sowing doubt is the key. “Al Qaida and Isis say on Twitter and YouTube that the shortest path to heaven is jihad and martyrdom. New recruits to Isis went to nightclubs, took drugs, were members of gangs and had sexual relations out of wedlock. They want absolution, forgiveness. The thirst for redemption is there. And Isis is catering to that need.

Countering the Isis narrative that there is a “war on Islam” waged by a “conspiracy of Crusaders and Zionists” – rather than a west in pursuit of its economic interests and global stability – is another important strand of an effective counter-extremism strategy, Dean argues. But Isis, he cautions, is a more coherent cause than al-Qaida ever was. Establishing a jihadi society in the areas it controls in Syria and Iraq has been effective. New recruits “will not have to spend their lives on the run like al-Qaida. They will stand their ground because it is the Islamic State- and they will fight to the death to defend it.”

Dean, 37, grew up in Saudi Arabia, fought the Serbs in Bosnia and ended up in Afghanistan swearing loyalty to Osama Bin Laden and meeting Khaled Sheikh Mohammed, the architect of the 9/11 attacks. But his own doubts surfaced when 240 African civilians were killed in the suicide bombings of the US embassies in Kenya and Tanzania in 1998. He questioned a 13th century fatwa that justified the death of innocents in a jihad – directly challenging al-Qaida doctrine on human shields. He saw a “slippery slope” and decided to get off it.

That led, via Qatari intelligence, to eight years working undercover with MI5 and MI6. He passed on information that foiled attacks and led to the arrest and deaths of former al-Qaida comrades. His cover was inadvertently blown in 2006 by a book that drew on CIA sources and he went public for the first time three months ago in a BBC interview. He has been pardoned in Bahrain and Saudi Arabia and now runs a consultancy in Dubai. The al-Qaida commander leader who issued a fatwa against him for treachery was killed in a US drone strike in Afghanistan.

Dean remains a devout Muslim and sees Isis as representing in part an Arab Sunni fightback against perceived reverses at the hands of Iran and Shia groups it supports or exploits – in Iraq, Lebanon, Syria and most recently in Yemen, where Houthi rebels are now facing the Saudi-led air strikes of Operation Decisive Storm. “The Saudis have stolen some of Isis’s thunder by countering Iran’s weight,” he says. In his assessment this has significantly cut jihadi recruiting in the kingdom – and encouraged Isis to mount sectarian bombings of Shia mosques.

Other terrorism experts argue that while Dean’s insights are valuable, his experience is outdated and he focuses too narrowly on the role of religion in jihadi recruitment while paying insufficient attention to social background and individual psychology. But he warns in turn of the “easy dismissal” of the effects of Islamic theology as a motivating factor. Anti-radicalisation campaigns– “led by Downing Street imams or Elysee preachers”- can never succeed because their official nature means they will be discredited, he insists. It may be a legacy of his MI6 years that he believes clandestine propaganda and psychological warfare methods work better.

“The last thing I want to do is to do what many security professionals do, which is to complicate the simple and simplify the complex,” Dean says. “If I have learnt anything it is not to take anything at face value. Do not accept Isis as the truth and the only truth. The books are out there. Do not rent out your brain to Isis so they can think on your behalf.”