You are here: Home / West Asia / Forget Somalia: this is the new sea piracy hot spot 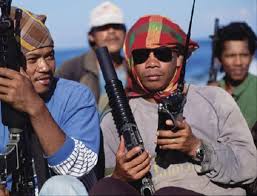 It’s early in the evening on Saturday, Aug. 8, and the Singaporean oil tanker “Joaquim” is on its way from the Indonesian port city of Tanjung Pinang to the small Malaysian island Langkawi, bearing 3,500 metric tons of fuel oil. The shipment never reaches its destination.

The Joaquim is attacked by armed pirates in the narrow Malacca Strait. The ship is found the next day, 3,000 metric tons of oil gone, the navigation system and communication equipment smashed, and the crew beaten but alive.

Sea crime in Southeast Asia is on the rise, according to shipping groups and governmental organizations. While most attacks aren’t like the one on the Joaquim—in which a cargo ship is robbed of its freight—shippers are growing wary about the situation in the region. That’s why they are bolstering antipiracy countermeasures on their vessels and asking governments for an increased response.

“This is a significant problem and it seems to be escalating,” said Matt Walje, lead author for Oceans Beyond Piracy’s 2014 State of Piracy report, which estimates the value of the oil stolen in 2015 alone at $5 million. “It poses a potential threat to world commerce.”

There have been 124 armed robberies, hijackings and other attacks on ships by Southeast Asia sea criminals in 2015 through Sept. 7, according to data from the International Chamber of Commerce’s International Maritime Bureau. Since 2010, attacks on ships in regional waters have more than doubled on a yearly basis, and in 2014 they accounted for nearly six of every 10 sea crimes world-wide, the group said.

The surge in Southeast Asian attacks comes as the number of incidents in the piracy “hot spot” of the early part of the decade—the Gulf of Aden, near Somalia, which links the Arabian and Red seas—has fallen to zero.

Southeast Asian seas, particularly the Straits of Malacca and Singapore, are home to key shipping routes. Nearly half the world’s oil, and much of the energy products imported by China and Japan, go through those waterways, according to Walje. As such, experts say, increased danger for shippers there is raising concerns.

Sea crimes in any of the “choke points”— places like the Horn of Africa and the Strait of Malacca can appeal to pirates because they are relatively narrow must-use routes for shippers—are serious threats to trade, according to Robert Gauvin, senior director for counter-piracy policy at the U.S. Cost Guard.

“This can affect the transportation of energy and goods, which can be very important to the economies for states in those areas, as well as their international partners, such as the U.S.,” Gauvin said. “The U.S. is very much concerned about issues like [piracy in Southeast Asia] because we feel it affects our national security and it also affects maritime transportation and the global economy.”

Somali piracy was attributed mainly to poverty and civil war in the region. It emerged as a serious threat to global trade and seafarers around the turn of the millennium, when gangs began hijacking ships off the country’s coast and in the Gulf of Aden. In early 2011, 736 hostages and 32 ships were being held for ransom in anchorages off Somali beaches at one time.

But experts have struggled to identify the reasons crimes at sea have jumped to a 12-year high in Asia, making the problem harder to tackle. Some say poverty in Southeast Asia, in part caused by overfishing, has strained communities’ incomes; others say gangs that have been active for years are now more organized and effective and are now successfully pulling off more ambitious attacks.

In Southeast Asia, pirates are increasingly hijacking ships to steal oil from slow-moving tankers but rarely seek to ransom the crew. They capture tankers, sail them to a mother ship and siphon off the fuel, then release the boats with their equipment smashed and, at times, the crews badly hurt. (Because the crews are generally not ransomed, analysts say, they may be likelier targets for violence than was the case in East Africa.)

The oil is sold on the black market. Walje, from Oceans Beyond Piracy, estimates that pirates have stolen more than 16,000 metric tons of oil products — with an estimated value of $5 million — in Southeast Asia this year.

“There’s a really high return on investment in a very short period of time with oil theft,” Walje said. ”When you’re siphoning oil up, you’re able to make millions of dollars quite quickly — as opposed to Somali piracy, where they sometimes had to sit on a vessel for a year or more in order to get multimillion-dollar ransoms.…It’s quite a large capital injection into a criminal enterprise.”

The shipping industry isn’t currently as concerned about Southeast Asia as it was about the Gulf of Aden, according to Philip Tinsley, maritime security manager at global shipping organization BIMCO — but it is watching the region with a careful eye.

Problems complicate solutions for shippers in the region

The Somali pirates were eventually deterred by the combined efforts of governments, international organizations and shipowners. Governments and international institutions deployed naval forces and coastal patrols, while shippers equipped their vessels with barbed wire, water cannons and armed guards, also rerouting ships and increasing their speed to make them harder to board.

The result was a sharp drop in piracy incidents in the area. So far, according to industry statistics, 2015 has been attack-free. The cost of accomplishing that, however, has been substantial.

At the height of the Somali attacks, the annual cost of piracy — including ransom payments, insurance premiums, the cost of stolen goods, vessel-protection measures, rerouting ships around the Cape of Good Hope and naval intervention — was estimated at $7 billion to $12 billion, according to Oceans Beyond Piracy. That fell to $2.3 billion last year, partly because of a drop in ransom payments and lower expenses associated with rerouting and insurance. (Oceans Beyond Piracy doesn’t yet have an estimate for Southeast Asia.)

But experts say the measures that worked in the Gulf of Aden won’t work in Southeast Asia. Asia’s dense map of territorial waters complicates the use of military vessels, a contrast to the African coast, where they can operate more easily in international seas.

“The pirates seem to be fairly adept in finding out where the territorial waters of the different nations start,” Walje said. “That way they can take a vessel in one area and move to another area, which slows the response from authorities.”

The factors that limit the use of military force and armed guards in the region mean that a solution will likely require a combination of tactics including vessel-protection measures, region-specific training for ship crews, and information sharing.

Physically safeguarding a ship usually runs between $5,000 and $15,000, according to Nodland, though projects can cost much more. Shippers can install barbed wire, reinforcing exposed ship doors, build “safe rooms” inside the hull to wait out attacks, and add water cannons and alarms.

“If you’re operating in a high-risk environment, you also need to physically harden your ship,” Nodland said.”

More broadly, local governments are stepping up efforts to address piracy before the situation worsens. In Indonesia for example, authorities arrested the alleged mastermind behind one of the highest profile oil-tanker attack — the hijacking of the Orkim Harmony in June — as part of a bid to combat a soaring number of incidents. And in Malaysia, the Maritime Enforcement Agency has set up an airborne special-task and rescue team.

And a group called ReCaap, the Regional Cooperation Agreement on Combating Piracy and Armed Robbery against ships in Asia, was created in 2004 to promote regional cooperation, share information and intelligence, and convene groups to discuss regional strategies and tactics.

But critics say gaps in the regional response remain. Indonesia and Malaysia aren’t involved in ReCaap even as those countries suffer heavily from increased sea crime. And it only works as an information-sharing and analysis center, rather than a direct reporting center that can respond to an attack, Tinsley said.

“You need to create a clearer line of communication, so if there is an incident, this is who you report to, so they can do something about it,” he said. A similar operation — the United Kingdom Marine Trade Operations — has been helpful in the Gulf of Aden, according to Tinsley, acting as the primary point of contact for commercial ships in case of a pirate attack.

That will need to come from Southeast Asian governments, according to the Coast Guard’s Gauvin. (The U.S. is a member of ReCaap; the organization itself didn’t respond to multiple requests for an interview.) There appears to be some urgency driving a response, as a July press report said Southeast Asian countries plan a joint operation to fight piracy in the Malacca Strait.

Gauvin said the governments need to work together on a system that will help with response, prosecution, and imprisonment of sea criminals in the region for conditions to improve.

“There needs to be coordination between local states,” Gauvin said. “It gives them the capability to sit down together and talk about these types of agreements. But it doesn’t happen overnight.”