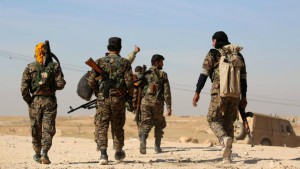 An American and a German volunteer were killed in late November in purported Turkish airstrikes on the northern Syrian city of Manbij, a Kurdish military council in the city has claimed.

Michael Israel, a US national fighting under the nom de guerre Robin Agiri, and Anton Lescheck, a German national known as Zana Ziwan, were both killed on 24 November according to an official statement from the Manbij Military Council earlier this week.

Several foreign fighters volunteering with Kurdish groups such as the People’s Protection Units (YPG) and the Syrian Democratic Forces (SDF) have been killed fighting in both Syria and Iraq.

SDF forces – viewed by Ankara as analogous to the Kurdistan Workers Party (PKK) that has waged a guerrilla war on the Turkish state since the 1980s – took control of Manbij from Islamic State group militants in August, and have maintained a presence in the area.

This presence has angered Ankara which is wary of growing Kurdish autonomy over territories close to Syria’s northern border with Turkey and in August embarked on a military campaign in Syria titled Operation Euphrates Shield.

Ostensibly aimed at combating the threat of IS, Operation Euphrates Shield has frequently clashed with Kurdish forces.

Involving both Turkish troops and Ankara-backed Syrian rebels, it is currently advancing on IS-held al-Bab with Turkish President Recep Tayyip Erdogan vowing to march on Manbij once the town has fallen.

Kurdish forces that have been entrusted by Washington with leading assaults on IS-held Raqqa, the extremist group’s de facto capital, have said they will turn back from Raqqa to defend Manbij if Turkish aggression on the city continues.

Israel, who was from California and a member of the Industrial Workers of the World – a revolutionary anti-capitalist union – was in Syria fighting with Kurdish forces for the third time, having made two previous trips.

“I am back in Rojava again and will be here for the next several months to do my part in defending the revolution,” Israel wrote on a Facebook in July.

“The Rojava struggle is the most dynamic and ground-breaking revolutionary movement of our time. I am determined that it is the job of leftist allies and internationalists to rally behind this movement, to help build it up and learn from it… the gains of the revolution under such austere and harsh conditions is truly remarkable.”

Leschek – who had been embedded with Kurdish forces since September – was described in a statement by Manbij Military Council as “fearless”.

Describing why he had joined Kurdish forces in Syria before his death Leschek said:  “It’s a true fight in Rojava for me, because here people neither surrender to tyranny nor to terror. I will support this democratic revolution to the end.”