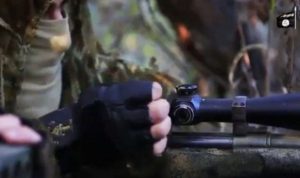 Islamic State has imposed strict measures in Tal Afar town after a prominent female sniper was found slain, a local source was quoted saying, like reported by iraqinews.com.

“Um Azam, a woman from the Russian federation, is known as ‘the dove’ for her good eyesight and accurate shooting. The skilled sniper was found dead in a narrow alleyway in Tal Afar, west of Mosul. She was slain by unknown people,” the source told AlSumaria News.

“IS imposed strict measures and arrested many people,” the source, who asked to remain anonymous, said. “Many members and leaders of the group are killed in the town, which indicates an internal infighting among the group to take over positions in the regions.”

Earlier on Tuesday, news reports said IS prominent vocalist abu Talha al-Shami was killed in an airstrike in the town.

Tal Afar is one of the important strongholds still held by IS in Nineveh since August 2014. The town has been set as the next target of operations after victory was declared in Mosul on July 10.

Iraqi Defense Ministry said last week that a date has been set for the town invasion, however, it will not be declared to maintain the secrecy of the intended operations.