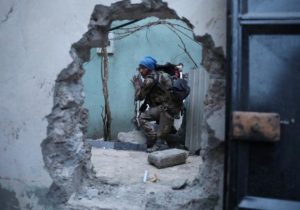 Amid signs of ISIS’ retreat in west Mosul, U.S. and Kurdish sources confirmed that hundreds of the organization’s foreign fighters have already fled the city in the direction of Syria.

Meanwhile, Iraqi forces announced liberating the government complex in the city where they raised the Iraqi flag, like reported by aawsat.com.

Following the Iraqi Army’s latest achievements, US Air Force Brigadier General Matthew Isler confirmed ISIS jihadists in Mosul were now “disorganized” and that some of their foreign members were trying to flee the city.

Reuters quoted Isler as saying that the foreigners were now leaving the battle to Iraqi ISIS militants. “I think that many of them are going to try to find a way out. They’re not well-organized and well-integrated and as a result of that, Iraqi security forces are able to make significant progress each day.”

Meanwhile, spokesperson for the Kurdistan Democratic Party Saeed Mamozini told Asharq Al-Awsat on Tuesday: “Based on information we received from inside the ISIS-controlled areas in the right part of Mosul, more than 300 fighters, including foreign commanders, fled at night to the Syrian city of Raqqa, the main stronghold of ISIS.”

Mamozini said the organization controls the desert routes from where it can smuggle its militants to Syria.

In the central square of Mosul, Iraqi forces continued their operation to liberate the Bab al-Toub area.

On Tuesday, the Iraqi Army’s Rapid Response Units, Counter-Terrorism Units and Federal Police Force announced they entirely recuperated Dawassa, Nabi Sheet and al-Danadan neighborhoods, which include several government buildings, the police station of the Nineveh governorate, the Central Bank and the Mosul museum.