You are here: Home / West Asia / Foreign fighters involved in heavy assault by Taliban in Afghanistan 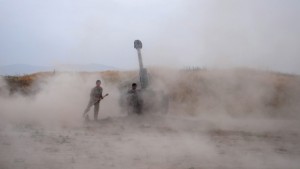 A Taliban assault that threatened to overrun a northern Afghan city involved a number of foreign fighters, officials said Saturday, a battle that saw at least 100,000 people flee their homes.

Kunduz’s provincial governor and its police chief suggested the foreign fighters could be part of a small contingent of militants who pledged their loyalty to an Islamic State group affiliate in Afghanistan, but offered no other evidence to support their claim.

The battle in Kunduz began April 24. Thousands of army reinforcements have been deployed to the city. Officials had feared in the days following the attack that Kunduz could fall to the Taliban.

Provincial Gov. Mohammad Omer Safi said the bodies of 18 foreigners had been retrieved from the battlefield, found to be from Tajikistan, Uzbekistan, Kyrgyzstan, Turkey and Chechnya.

Safi said the foreign fighters provided technical and financial support to the Taliban fighters who he believed were fresh graduates from madrassas in Afghanistan and neighbouring Pakistan with little battlefield experience.

“Our forces have seen well-dressed forces with covered faces. We can’t ignore the presence of Daesh here, but we also heard that there were differences among insurgents themselves,” said provincial police chief Gen. Abdul Sabor Nasrati, using an Arabic acronym from the Islamic State group.

At least 100,000 people have fled their homes around Kunduz amid the assault, said Mans Nyberg, a spokesman for the UN’s High Commissioner for Refugees in Kabul.

The Taliban’s spring offensive has seen the militants take their anti-government fight to most regions of the country, with eastern areas near the Pakistan border, like Paktia province. On Thursday, gunmen there killed a police officer and a civilian at a cricket match and kidnapped 36 people, said Gen. Zelmai Oryakhail, the province’s police chief.

All but three of the abductees had been freed, he said. No group has claimed responsibility for the attack, though officials suspect the Taliban carried it out.