You are here: Home / MidEastGulf / For women under ISIS, a tyranny of dress code and punishment 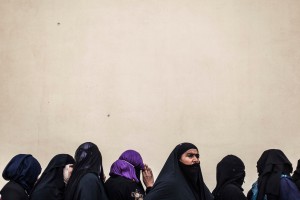 By the time the jihadists had finished, not even a woman’s eyes were legal. Showing them was a punishable offense.

The dress code imposed on the women of Mosul started soon after the Islamic State overran the city more than two years ago. It was carried out gradually, until every part of the female body was erased, starting with the face, then the rest of the body — including the hands, which had to be covered with gloves, as well as the feet, which had to be hidden by socks. It ended with an announcement blared over loudspeakers, telling women to wear a film of black cloth over their eyes.

Halima Ali Beder, 39, said she had resentfully made each new addition to her wardrobe, starting with the niqab to cover her face, and the abaya, also known as a jilbab, a loosefitting gown. Yet she still ran afoul of the Islamic State’s increasingly harsh enforcement of its codes when she stepped into the lane outside her home, planning to pop over to her neighbor’s house.

“I put on everything — the niqab, the abaya, the gloves, the socks. All I forgot to do is cover my eyes,” said Ms. Beder, one of a dozen women from recently liberated neighborhoods of the city who recounted their experiences in interviews at the Khazer refugee camp, about 45 miles from Mosul in northern Iraq.

Ms. Beder had taken only a few steps when the morality police spotted her, and officers began shouting at her, castigating her. “They said: ‘Where is your husband? Does he accept that just anyone can see your face?’ I said: ‘But I wasn’t showing my face. Only my eyes!’”

More than two million people lived in Mosul when it fell to the Islamic Stateon June 10, 2014. It was a conservative city where most women already covered their hair with a scarf and their arms with long sleeves. But as in other places where the militants imposed their creed, the new rules took enforced modesty to such an extreme that it riled families in Mosul, who described how they quickly began to feel suffocated.

Three days after seizing the city, the militants began going door to door to distribute the “Bill of the City,” laying out how they planned to govern, according to a study by a researcher, Rasha Al Aqeedi, a native of Mosul and now a fellow at the Al Mesbar Studies and Research Center in Dubai.

“To the virtuous women,” the bill said, “in modesty and the wide, loose jilbab, stay in your homes and leave them only in cases of necessity.”

All over territory controlled by the Islamic State, billboards were going up showing a picture of a woman looking like a black silhouette, completely covered in concealing clothes. It laid out the new look in seven bullet points, including that a woman’s gown should be “thick and not reveal what is beneath” and should “not draw attention.”

For at least a month, obedience to the new rules was not enforced. Then at the end of July, thousands of niqab sets were distributed to shops. The first of numerous decrees was issued, ordering women to don the niqab as well as gloves. Around the same time, residents began seeing vehicles painted with the logo of the Islamic State’s morality police, Ms. Aqeedi said.

Opposite the university, they opened the police unit’s headquarters, known as the Diwan al-Hisba. Its enforcement officers fanned out across the city, carrying books of numbered citations.

When the police caught a woman straying from the dress code, they issued a notice in exchange for her husband’s ID card. He then had to appear at a hearing before a judge. Depending on the offense, he was forced to pay a fine, or else either he or his wife was sentenced to a whipping, recent escapees said.

When the Islamic police barged into the home of Ms. Beder, they demanded her husband’s ID. Then when he appeared before them, he was forced to pay a fine of 50,000 dinars — around $40, a sizable portion of the family’s monthly income.

Women say the minders multiplied each month, until residents had the impression that the morality police were omnipresent. Officers loitered near shops and beside market stalls. One woman, Zeena Mohamed, 27, described how she lifted her flap just enough to see the cream-colored dress she was considering buying. She couldn’t be sure of its hue through the black film, she said.

Straightaway she heard a man shouting, and looked up to see the officer, who expelled her from the shop.

Others described not being sure of the amount of money that shopkeepers handed back to them, afraid to lift up the veil to check. Tripping, even falling, became a regular occurrence, they said.

Throughout areas controlled by the terror group in Iraq, as well as in Syria and Libya, the Islamic State’s hisba became a bureaucracy of virtue, its offices filling up with binders of receipts for the various violations it had issued. It prosecuted a list of offenses, fining and flogging men for incorrect beard length, for failure to pray at the sanctioned time, for possession of cigarettes and alcohol and for a long list of other perceived moral failings.

On letterhead bearing the group’s black flag, the Islamic State released fatwas detailing each new restriction and outlining penalties, according to documents obtained by the researcher Aymenn Jawad al-Tamimi, who agreed to share several unpublished examples with The New York Times. One fatwa discussed the appropriate color women should wear, concluding that red was illegal. Another stresses the importance of covering the entire face “because it is the place of captivation and temptation.”

One woman was stopped because her sock had a hole in it, revealing the skin on her ankle. A middle-aged secretary recounted how the gloves made it hard for her to hold a pen, which kept slipping. When she tried taking off the glove of her writing hand, she was spotted and threatened.

Because the dress code applied to what women should wear in public, Wafa, a 39-year-old woman, did not bother putting on the attire when she went to bake flatbread in the earthen oven inside her family’s compound.

Though the compound is encircled by a wall, it was low enough for people to peer over, which is how the hisba saw her. Officers immediately came to demand her husband’s ID.

“I told them if you plan to start interfering even inside our homes, then you need to start bringing us propane, and groceries and the things we need, so that we don’t have to go out,” she said. “You’re making us live in the Stone Age.”

They let her go with a warning, but the next time, she was punished. Wafa, who asked that only her first name be used, said had been at a picnic with her children. She lifted the khimar, the fabric over her face, just enough to bring her spoon to her mouth, when she noticed the black car with the green logo of the morality police, she said.

This time, they confiscated her husband’s ID and gave him a notice to appear. “Reason for detention,” says the receipt, numbered 4715. “Wife outside without khimar.”

They then drove Wafa to their office, where a long-bearded judge jotted down her punishment: 21 lashes.

“I tried to protest. To explain. How can I eat if I don’t lift up the khimar? But they didn’t listen,” she said. They delivered her to a room where a Syrian woman ordered her to kneel. In the woman’s hand was a cable that had metal spikes on the end.

Her back shredded, she spent two nights at a hospital and for weeks afterward she could sleep only on her stomach, she said.

It eventually became clear that the aim of the rules was to keep women cloistered inside their homes. “This was the entire purpose. The essence of their Islamic jurisprudence is to make women melt away. To make them invisible,” Ms. Aqeedi said. She gave the example of a woman she keeps in touch with who is still in Mosul and has not left her home for more than two years.

A small number tried to rebel. Ms. Mohamed said she was among them, routinely talking back to the morality police, an account confirmed by her mother and sisters.

Not long before their neighborhood was liberated, Zeena Mohamed and her sister Mona went to a store that sold women’s intimate wear. Among the customers were two wives of Islamic State fighters, “and they were buying the raciest lingerie in the entire shop,” Zeena said.

When the sisters left the shop, they passed the two Islamic State husbands, loitering in the hallway outside the shop. One saw that Zeena had forgotten to pull down the flap over her eyes and began loudly admonishing her.

“Your wife is upstairs buying racy panties,” she recounted saying, “and you’re concerned about me showing my eyes?”