You are here: Home / Europe / For Syrian refugees, old frictions at home re-emerge in Europe 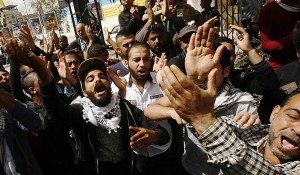 Tempers were bound to fray, with tens of thousands of migrants and refugees out in the cold, trying to walk through Europe.

Afghans and Arabs accuse each other of cutting the line for buses on the Slovenia-Austria border. Thousands of people have been backed up there for days, sleeping outdoors on the asphalt in no man’s land between two border posts, rather than in a huge heated tent nearby, because they don’t want to lose their places in line for the bus.

Arguments break out. Police try to keep them calm.

But a different kind of argument — a political one — erupts among Syrians, milling around in the tent nearby. It begins when NPR asks one refugee, Abdul Karam Mohamed, why he’s fleeing Syria now, with the war there already in its fifth year. He’s from a village near Idlib, in Syria’s northwest.

He says that when the war broke out in early 2011, his village was relatively untouched by the violence. He planned to wait out the fighting. He started studying for a master’s degree in business administration.

But then Russian bombs started falling on his village late last month.

“So 11 days ago, I decided to come to Germany or Netherlands,” Mohamed says, “to complete my studies and search for a good future in Europe.”

The mere mention of Russia and its airstrikes against Islamist groups who oppose Syrian President Bashar Assad turns heads in this refugee tent. A stranger and fellow Syrian, Lazarus Azar, overhears Mohamed’s story of fleeing the Russian bombardment, and interrupts.

“No that’s wrong. The Russians help the Syrians. [It’s] the Islamic groups that are so bad,” Azar says, waving his finger. “Syria was so beautiful,” he adds with a sigh. “But now everybody wants leave because [they] don’t know when [they] will die, or their family will die.”

These men are from opposite sides of Syria’s civil war. Mohamed is a Sunni Muslim opposed to the rule of Assad, who is an Alawite, an offshoot of Shiite Islam.

Azar, a Christian from Damascus, supports the Syrian regime, and thinks Russia’s intervention might save his country.

And now they find themselves perched on cots right next to each other at this camp in Slovenia.

Encounters like these are happening across the Middle East and Europe, as refugees from both sides of Syria’s civil war stream out of their country seeking security on another continent. They’re often side-by-side with their ideological enemies, in closer quarters than they’ve ever shared before — having conversations they never had before.

With the Syrian war in its fifth year, some of those fleeing now say they’re from areas that had been relatively untouched by major fighting, until Russia’s airstrikes. They’re joined on the migrant trail by some Assad supporters, who feel their faith in the government being tested. People like Ali Saleh, whose father is a career officer in Syria’s army.

“The Syrian army is very good! The situation is [getting] better day after day, and Russia helps us,” says Saleh. “Maybe [we’ll be able to go] back to Syria after one year.”

Saleh, 20, is traveling with his mother and younger siblings. His father stayed behind to fight. The family took all their belongings though, just in case. They don’t really know how long they’ll be gone.

Half a dozen other Syrians gather around, talking politics. The conversation moves from their individual reasons for leaving — Russian bombardment, U.S.-led coalition bombardment, the economic effects of the war — to global geopolitics.

“It’s a Cold War between Russia and United States of America,” yells Yassin Hamdallah, who hails from Daraa, in Syria’s southwest, where the war first broke out.

“They make people fight each other, buy a weapon. I have lost nine people of my family,” he says, and starts counting on his fingers and naming them: his mother, cousins, uncles.

Hamdallah says that aside from this political discussion, for the past 21 days, on his route out of Syria, he’s tried to avoid his countrymen altogether.

“It’s too sensitive, because a lot of people have other ideas,” he says. “I have seen a lot of fighting here between Syrian people.”

He’s talking about verbal fighting — arguments — along the migrant trail through Turkey and up through southern Europe and the Balkans. But he says he’s also seen too much physical fighting — war — back home.

“It’s just for what they believe in,” he says. “But if we Syrians could be united, I’m sure we’d live peaceful lives. I’m sure of it.”