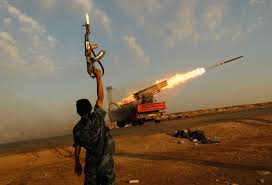 In Misrata, a statue of a fist crushing a U.S. fighter jet that rebels seized as war bounty from Muammar Gaddafi’s compound stands testimony to the city’s part in Libya’s 2011 revolution.

Four years after they helped defeat Gaddafi, Misrata’s armed brigades are expected to play their part among the former rebel forces, tribal fighters and other factions who will determine whether a U.N. plan to end Libya’s crisis survives or fails.

A conflict between two rival governments and parliaments — a self-proclaimed body in Tripoli and the internationally recognized set-up in the east — has left the North African nation effectively partitioned.

After months of talks, the United Nations has offered a deal to create a power-sharing government to represent each faction and reflect Libya’s traditional balance among its regions and cities.

But even if political leaders agree — that is still far from clear — it will be the brigades of former rebels in Tripoli, Misrata, Zintan and those in the east who decide how a political settlement works out on the ground.

The importance of Misrata, a port city and regional economic power, was underlined last year when it backed the takeover of Tripoli from rival factions to establish the self-proclaimed government there.

Now most of Misrata’s brigades — including the powerful Al-Majoub and Halbous units — support the U.N. deal.

“This is the only solution. There is no a way through arms,” said Ismail AlMjaree, a brigade commander in Misrata. “There is a new awareness among revolutionaries, they are asking: ‘Why are we still fighting, why isn’t the country being built?'”

Libya’s post-revolt history though is not encouraging.

In the past two years, armed brigades have invaded Tripoli’s parliament to oppose political decisions, taken over ministries and even kidnapped a prime minister.

With no national army after the fall of Gaddafi, the rebel brigades were incorporated into quasi-official military units, assigned to ministries and government offices. Tens of thousands of fighters are on the state payroll.

But as the post-Gaddafi transition fragmented along regional lines, those brigades often stayed more loyal to commanders, tribes or cities than to the idea of a Libyan state.

Less than 18 months ago, Misrata brigades battled in Tripoli with rivals from the western city of Zintan, who had controlled the airport since 2011.

That conflict forced the Zintan fighters out and destroyed the international airport. Most diplomats left the capital.

Libya’s internationally recognised government and elected parliament now operate out of the eastern cities of Beyda and Tobruk, backed by a loose coalition of forces including former Gaddafi ally Gen. Khalifa Haftar and his Libyan National Army.

In the capital, the self-declared National Salvation government is supported by Misrata forces and a patchwork of Tripoli brigades, who operate independently under the nominal command of the interior ministry.

Western governments have been pushing for the U.N. deal, worried that Libya’s chaos has allowed Islamist militants and people smugglers to expand in the security vacuum. But western officials acknowledge reactions on the ground will be vital.

“We have to recognize there will be hardliners who will not accept this. But we have to get as many of the military commanders as possible to accept and to implement this,” said one Western diplomat.

Splits have emerged in both camps as hardliners dig in. For the east, Tripoli is controlled by Islamist extremists; For Tripoli, Haftar in the east embodies all they fought against to oust Gaddafi.

The U.N. agreement calls for a unity government led by a presidential council of a prime minister, five deputy prime ministers and three senior ministers — an unwieldy arrangement meant to appease all parties.

The elected House of Representatives (HOR) will be the main legislature, alongside a second chamber, the State Council, that includes members of the reinstated General National Congress (GNC) in Tripoli. The deal also envisages demobilisation of armed factions.

Both houses are still to vote on the deal. But already critics in both camps dismiss it as U.N.-imposed violation of Libyan sovereignty or reject the proposed candidates. Others question the legitimacy of the elected parliament.

“Many people have what I call the Gaddafi virus. People who have power, don’t want to give it up,” said Abu Qassem Egzait, a GNC member who leads a block supporting the agreement.

“It’s impossible that the GNC will vote. We are dealing with a very difficult situation. Maybe we can get support of independents for the deal without the GNC,” he said.

That may mean the emergence of a HOR supported by moderates within the GNC that leaves hardliners out of any deal.

For those against the U.N. accord, though, other options exist. Direct meetings between HOR and GNC members already took place in Tripoli, lawmakers said.

“Every sensible person supports dialogue,” said Mohamed Busidra, a GNC member opposing the U.N. deal. “But it’s a mess. We were supposed to accept what was imposed on us, we were not even part of this.”

Even if the U.N. agreement works, questions remain about what happens next, with problems likely in the disarming of armed groups and the formation of a national army.

The European Union and international leaders are promising aid and financing for a new government. But it will be hard to manage the disparate armed factions after a settlement.

Installing any new national government in Tripoli may mean negotiating with six or seven local commanders.

This week, clashes broke out Tripoli between one local faction, the Tripoli Revolutionary Brigade, and Misrata forces, officials said. Last week, clashes erupted in western Libya between armed groups backing each of the rival governments.

More worrying are divisions in the east, where one group in favour of regional autonomy controls major oil ports and this week banned some tankers from the Zueitina terminal.

The key question for both camps is Haftar and his Libyan National Army. Haftar has waged war on Islamist militants in the eastern city of Benghazi and this year he was named commander in chief by the elected parliament in Tobruk.

For many in the east he represents the possibility of national army away from the influence of city-based brigades.

For Misrata and the west, the former Gaddafi general is unacceptable. Misrata commander AlMjaree says Libya needs a unified military force that includes members of Misrata, Zintan and other brigades. But there is one red line: Haftar.

“If he has any part, it will be the first reason for the new government to fail,” he said.