You are here: Home / Senza categoria / For Islam and against America: what fuelled Pakistan’s nuclear black market? 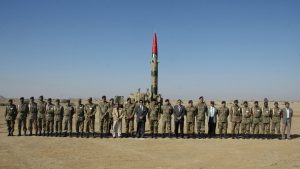 Evidence indicates that it is difficult to make generalisations about the whole nuclear proliferation episode involving Pakistan, as different sets of motivations, circumstances, and players were involved in the three cases under discussion. Even the different stages of each case require separate treatment—for example, both Iran and North Korea did nuclear deals with the AQ Khan network in two separate stages, with a gap in between, like reported by qz.com.

For instance, the circumstances under which Pakistan helped Iran in 1987 were markedly different from the AQ Khan network’s nuclear cooperation with Iran in 1993-94.

In the first phase, Khan’s half-hearted and duplicitous dealings with Iran were in line with the instructions he had received from Zia and his coterie, and General Aslam Beg had most probably been fully informed. Beg certainly shielded Khan during the Zia years. After the rise of Beg as army chief in August 1988, the policy regarding nuclear cooperation with Iran was streamlined. Beg was of the view that the global spread of nuclear weapons could lead to a multipolar world that would suit Pakistan’s interests better than a bipolar or unipolar world dominated by the United States. Khan had until then carefully handled the relationship with Iran via third parties.

In the second stage of Pakistan’s nuclear links with Iran (1993-94), both the political situation and the regional security context had changed significantly. Iran and Saudi Arabia were fighting a proxy sectarian war in Pakistan, leading to significant violence, and Pakistan and Iran had developed divergent interests in Afghanistan (with Islamabad supporting the Taliban and the latter the Northern Alliance). Pakistan’s military could not support Iran’s nuclear ambitions in this new situation. Moreover, Aslam Beg had already retired from the army in 1991 and was no longer in a position to support and provide cover for Khan’s activities.

However, Khan responded positively when approached by Iran through third parties with financial interests. He could pursue such interests knowing that Pakistan’s army was beholden to him for his efforts to procure the No-Dong missile from North Korea, and thus he was immune from any questioning. By the mid-1990s, Khan had also developed detailed brochures and packages containing key information, equipment, and documentation, often digitised, sufficient to attract the attention of prospective customers, aimed at maximising his profits and satisfying his desire for proliferation.

As David Albright aptly maintains, Khan’s accomplices in these nuclear sales were European engineers and ambitious businessmen out to get rich quick: “Urbane and educated, they stashed millions of dollars in secret bank accounts” and “they also drove the business by always being on the lookout for promising new markets.”

The second phase of Pakistan-Iran nuclear links was a product of such motivations.

Pakistan’s nuclear cooperation with North Korea was entirely different from that with Iran. Pakistan desperately needed the No-Dong missile technology, and North Korea was initially hesitant. Finally Khan got involved, and the deal was done around 1994.

However, as in the Iran case, the second phase of this interaction was different from the first. No third party was involved in this case but Khan, likely on his own accord, continued helping North Korea in the late 1990s and early 2000s. Evidence, however, is a bit murky in this second phase on many counts as hard information is missing.

Libya, in comparison to the other situations, is an open-and-shut case, as there is growing evidence that Khan’s international network was fully involved, but in an independent capacity. Some confusion remains as to why president Musharraf visited Libya in 2000 and how the trip coincided with the publication of an advertisement in Pakistani newspapers regarding procedures to be followed for the exports of nuclear material.

In terms of what inspired and motivated Khan and his supporters within the Pakistani nuclear establishment to transfer nuclear technology abroad, Khan’s phobia about the USA and Israel trying to destroy Pakistan’s nuclear programme was a factor, as was his sense of self-imposed obligation to help other Muslim countries acquire nuclear technology. The insecure nature of the Pakistani state and the religious worldview of influential elements within its important institutions exacerbated the nuclear proliferation risk.

The three critical periods when nuclear proliferation took place witnessed severe civil-military tensions, political instability, and mounting internal and regional security threats, in turn creating an enabling environment for a relatively small group of influential people to pursue proliferation activities. Even though an elementary nuclear command system was in place from the early days of the programme, loose controls and absence of monitoring mechanisms significantly helped the AQ Khan network. Weak institutional management and political polarisation generated chaos and confusion that allowed Khan and company to operate freely. General Beg and Khan proved to be “proliferation nationalists,” as set out in the introductory chapter.

Inspired by a burning desire to defy the West in general and America in particular, their ideological leanings revolved around their perceptions about a clash between the Muslim world and the West. They both employed “myth-making” strategies to achieve their goals—they supported Iranian and Libyan nuclear programmes with a vision of helping other Muslim countries in need of nuclear weapons technology.

They had a well-defined agenda to transfer nuclear technology and their influential positions meant that they needed to co-opt only a few others. Khan was held in such high esteem that he could operate without raising many red flags.

The prospect of a nuclear Iran terrified Saudi Arabia…This insecurity inspired Saudi Arabia to improve its ties with Israel, and secret communications over the years brought the two states onto the same page with regard to developing a joint strategy to counter Iranian moves in the region. For the House of Saud, which is empowered by petrodollars, security is of utmost value, and it would even be prepared to pay an exorbitant price for nuclear weapons. The challenge is that buying nuclear weapons is quite different from buying any other military hardware. The idea of a nuclear umbrella sounds more plausible, and might be the best bet for the Saudis. But it is hard to find a provider—except Pakistan, which might be attracted to such an undertaking under special circumstances and for a very high price, while ensuring that it would control the weapons even in that eventuality.

But this is mere speculation, as there is no hard evidence to suggest that such a secret understanding exists.

In reality, the Pakistani parliament’s refusal of an official Saudi request in 2015 for support in the Saudi military offensive against Yemen is indicative of Pakistan’s thinking. Pakistan’s military leadership is also sceptical, and it was the military that received the initial Saudi request but decided to pass it over to the civilian side, knowing quite well the most likely outcome. Pakistan’s unwieldy military and political entanglements abroad had only brought misery to the country in the shape of radicalization, sectarian bigotry, and violence—and finally it appeared that it had started learning from its past mistakes.