You are here: Home / West Asia / For Afghanistan in 2016, U.S. plans to deploy “expeditionary advise and assist” teams 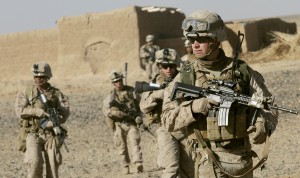 As U.S. commanders in Afghanistan look ahead to the 2016 fighting season, they plan to keep force levels steady while deploying special operations troops and “expeditionary advise-and-assist” teams to support the Afghan army’s ground-level fight against the Taliban insurgency, a top U.S. general in Afghanistan said.

“We expect the troop levels for 2016 to look about what they did for 2015,” said Army Brig. Gen. Wilson Shoffner, deputy chief of staff for communications for the American-led coalition forces in Afghanistan.

About 9,800 U.S. troops are now in Afghanistan. President Obama announced in October a new plan to slow the drawdown of American forces and extend the U.S. military mission there beyond 2016.

Obama said he wants cut the force in half, to about 5,500, before he leaves the White House in January 2017, but the trajectory of that drawdown remains unclear.

Army Gen. John Campbell, commander of the military mission in Afghanistan, will travel to Washington in January to talk with top U.S. officials about plans for 2016. Those conversations may focus on how to most effectively deploy U.S. forces in an advise-and-assist capacity alongside Afghan forces.

U.S commanders are considering an expansion of the expeditionary advise-and-assist teams that have begun deploying to hot spots to support Afghan military leaders at the corps level. That’s already underway in Helmand province, where Taliban insurgents are seizing key districts like Sangin and are threatening to topple local governments.

Marine Maj. Gen. Paul Brier, head of the advise-and-assist directorate for the Afghanistan mission, has been routinely sending teams of six to 12 U.S. troops to the Afghan army’s Helmand outpost in Lashkar Gah, a defense official said.

“The expeditionary advising may be the model that we go to as we continue to bring the force levels down,” Shoffner said.

While those teams are at the corps level headquarters, U.S. Special Operations Command teams are farther out with Afghan army battalions, or kandaks. Yet unlike a few years ago, those American troops are staying out of the toe-to-toe fighting.

“But if the Afghan special operations forces are conducting an operation, then the coalition advisers will detach and go to an overwatch position or will go to a command post while the operation is going on.”

Campbell hopes to focus the U.S. training effort on shoring up several key weaknesses in the Afghan army. Those include getting the Afghans to rely less on static, far-flung checkpoints, and to better centralize and mobilize their combat power, Shoffner said.

The Afghan air force also will be a priority. In January, Afghanistan is expecting to receive its first A-29 Super Tucano, a fixed-wing turboprop aircraft that can provide close-air support for ground troops.

“Leadership” also will be a top priority, Shoffner said. The Afghan army continues to suffer from high attrition, a problem that U.S. officials believe is linked to bad or corrupt leaders.

“What we found … is that if you have a problem with attrition, it generally is a function of leadership,” Shoffner said.