You are here: Home / MidEastGulf / For a Islamic State fighter, a paid honeymoon in caliphate’s heart 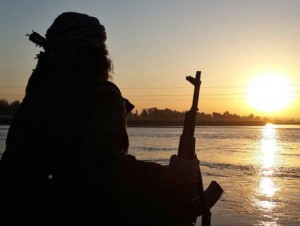 The honeymoon was a brief moment for love, away from the front lines of Syria’s war. In the capital of Daesh’s self-proclaimed “caliphate,” Syrian fighter Abu Bilal Al Homsi was united with his Tunisian bride for the first time after months chatting online. They married, then passed the days dining on grilled meats in Raqqa’s restaurants, strolling along the Euphrates River and eating ice cream.

It was all made possible by the marriage bonus he received from Daesh: $1,500 (Dh5,509) for him and his wife to get started on a new home, a family — and a honeymoon.

“It has everything one would want for a wedding,” Al Homsi said of Raqqa — a riverside provincial capital that in the 18 months since Daesh took control has seen terrorists beheading opponents and stoning accused adulteresses in its main square. Gunmen at checkpoints in the city scrutinise passers-by for signs of anything they see as a violation of Sharia, as slight as a hint of hair gel or an improperly kept beard. In the homes of some of the Daesh commanders in the city are women and girls from the Yazidi religious sect, abducted in Iraq and now kept as sex slaves.

“It is not just fighting,” said Al Homsi, who uses a nom de guerre. “There are institutions. There are civilians [that Daesh] is in charge of, and wide territories. It must help the immigrants marry. These are the components of a state and it must look after its subjects.” Al Homsi spoke in a series of interviews over internet calls, giving a rare look into the personal life of an Daesh terrorist.

Helping fighters marry is a key priority. Aside from the normal stipend they receive, foreign fighters get $500 when they marry to help them put together their new household. Aymam Al Tamimi, an expert on insurgent groups, said that when Daesh took Iraq’s second largest city Mosul last summer, one of the first things it did was set up an Islamic court — not just to pass sentences under their strict version of Sharia but also “to give official Daesh approval of marriages.”

The 28-year-old Al Homsi got a particularly large bonus because his marriage, which took place in April, brought in a useful new recruit: His wife, who goes by the nom de guerre of Umm Bilal, is a doctor and speaks four languages. He said she will be of service to the caliphate.

The AP has spoken with Al Homsi repeatedly over the past three years, when he started as an activist covering the fighting in his home city of Homs in central Syria. An IT specialist before the civil war broke out, Al Homsi reported prolifically on social media about the two-year siege of the city by Al Assad’s forces and often briefed reporters.

He was always an ultraconservative Islamist, and he told AP he had supported Daesh as early as 2013. Being caught in the punishing siege of Homs turned him from an activist to a fighter. He was among the last die-hards who remained holed up in a Homs neighbourhood blasted constantly by government troops. When the siege ended in a May 2014 truce, Al Homsi emerged hardened and has since been a member of Daesh.

It was from his social media activity that he met his wife. From Tunisia, she admired his comments and briefings online.

“She has been an old follower of mine, during the siege,” Al Homsi said with a slight smile.

After communicating with her through internet calls and online, Al Homsi found out that her brother had joined Daesh and was in the eastern Syrian city of Deir Al Zour.

The 24-year-old bride-to-be travelled through Algeria to Turkey, and from there to Raqqa with a group of other women joining Daesh. There, they were housed in a guest house for women, which is also used as the headquarters for the Daesh female police corps known as the Khansa Squad.

“It is a luxury place, with a garden, A/C, nice furniture, like any apartment in Europe” so that immigrants don’t feel estranged, said Abu Ebrahim Al Raqqawi, an anti-Daesh media activist. Like others in his media collective, he uses a nickname for his security and doesn’t specify his whereabouts.

In April, Al Homsi made the hazardous 250-kilometre journey from Homs to Raqqa to join her, bringing a recommendation from his local commander to prove his membership in Daesh.

It was rare marriage of a Syrian male fighter — an “ansari” as the group calls them — with a foreign migrant, or a “muhajira.”

Usually, foreign women marry foreign fighters in Daesh. Al Homsi recalled the case of a French militant who was supposed to marry a French woman who came to join the group. He was killed in battle but he asked in his will that if that happened, his fiancee should marry his Swiss friend, Al Homsi said. She agreed.

During the few days of their honeymoon, Al Homsi and his bride enjoyed Raqqa’s relative tranquillity, riverside promenades and restaurants, staying in an apartment Al Homsi borrowed from a friend.

Then the couple travelled back to the countryside around Homs, where Daesh terrorists are holding ground against Al Assad forces and rival rebel groups.

There, Al Homsi used the money from his grant to prepare a home for his new bride — and his four kittens, which he held up proudly in the video chat conversation with the AP. The couple is now expecting a new baby and hoping for a new cash injection with the childbirth, as the group can pay up to $400 as a bonus for each child.

For now the group provides him with a stipend of $50 a month and a similar amount for his wife, which he said are mainly for “entertainment.”

Everything else is paid for: He gets an allowance for his uniform and clothes, some household cleaning supplies, and monthly food baskets worth $65.

It is the duty of the state, Al Homsi said, to care for the fighter’s family while he is away battling to expand the caliphate. Soon after speaking to the AP, Al Homsi was back on the battlefield, among the terrorists who took over the ancient city of Palmyra earlier this month.

“The fighter is on the front,” Al Homsi said. “How will he bring food to the house?”