You are here: Home / FakeNews / Fooling a fake-news site? Easy! 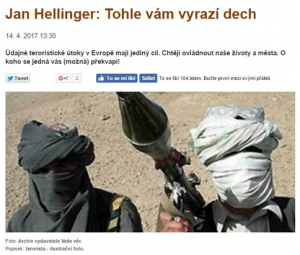 Do you know why terrorists have recently resorted to using trucks and cars for their attacks? There is a well-hidden secret reason for this, and a Czech outlet has just uncovered it. After many terror attacks were committed with firearms, Brussels limited the right to carry guns. Then, since the Nice, London and Stockholm attacks were committed using cars, Brussels will obviously try and limit the entrance of cars into city centres. This clearly demonstrates that the attacks were planned as part of a deep conspiracy involving the American secret services, NGOs, and “bicycle-fascists and eco-terrorists”.

Of course, this idea is all just a parody of the well-known conspiracy sites that seek ever crazier explanations for the terror attacks in Europe. But that was not so evident to the editors of Parlamentní listy, probably the biggest outlet in the Czech Republic regularly spreading pro-Kremlin disinformation stories and unprovable conspiracy theories.  It published the article featuring the story, which was submitted by former journalist Karel Goldmann who just wanted to fool the website and used the pseudonym Jan Hellinger.

“Although I knew that Parlamentní listy will publish any kind of nonsense, I just wanted to test whether they do at least something which would resemble an editorial work, like checking the author or checking the information in the article. Obviously, they don’t,” the author explained to the website MediaHub.

Inspired by Goldmann, another former Czech journalist, Jan Bindr, immediately repeated the experiment with an article claiming that the chemical attack in Syria was in fact committed by the US Army, which, he wrote, regularly uses chemical weapons in Syria – but had mistakenly loaded sarin instead of the usual chemtrails they had been using on the Syrian public to change their minds in the past couple of years.

“I have even quoted totally made-up sources. If they at least googled it, they would find out immediately. There is not a single verifiable statement in my article. It is pure nonsense from the beginning until the end and I violate probably all items of every journalistic ethical codex. And yet, Parlamentní listy have published it,” Bindr told MediaHub.

MediaHub asked the editorial board of Parlamentní listy for comment. The disinformation-oriented outlet didn’t answer and just pulled out the articles from its website.