You are here: Home / Mediterranean / Flaming balloons from Gaza said to spark fires in southern Israel

Booby-trapped kite also reportedly sent from Strip, amid recent wave of blazing kites flown across border, like reported by toi.com 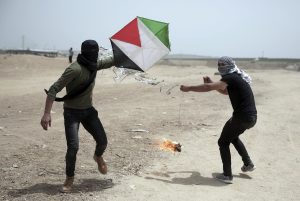 A series of fires broke out on Monday in southern Israel, apparently as a result of flaming objects flown over the border from the Gaza Strip.

During recent clashes on the Gaza border, Palestinians have adopted a new tactic of sending blazing kites into Israel, sparking fires in nearby agricultural lands.

In a first, helium-filled balloons carrying flaming material were used to start a number of Monday’s blazes, according to Hebrew media reports.

As a result of the fires, hundreds of dunams (dozens of acres) of wheat fields were burned. There were no reports of injuries.

In addition to the flaming balloons sent over the border, a suspected booby trapped kite was reported to have landed near Kibbutz Nahal Oz.

Amid the increase in flaming kites being sent towards Israel, Israeli military aircraft struck a Hamas site in the northern Gaza Strip used as a launching pad for the incendiaries Saturday night.

The attack was in response to “terrorists launching burning incendiaries in an attempt to a cause fire in Israeli territory,” an army spokesperson said.

This was the first known case of the army striking a Hamas site in response to the kite firebombs, dozens of which have been launched in recent weeks.

The move comes after several Israeli reports that the army was considering ramping up its response to the kites, including targeting those launching them with lethal force.

The kite tactic was introduced as part of the weekly “March of Return” clashes at the border fence, an eight-week-long set of protests that began on March 30 and is due to continue until at least mid-May.

Though they were initially planned as non-violent demonstrations, the protests were co-opted by the Hamas terror group, which rules Gaza and whose leaders have said their goal is to erase the border and “liberate Palestine.”