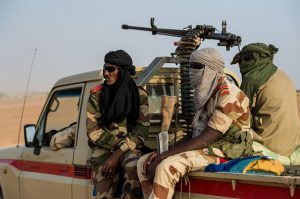 Five people were killed on Wednesday in an attack on a village in the western Tillaberi region of Niger, near the border with Mali, as the country celebrated the Eid al-Fitr holiday marking the end of the Muslim fasting month of Ramadan, a local official told AFP.

“The attack took place on Wednesday morning in the village of Fantio. The death toll is five dead and two seriously injured,” the official said.

The attack was carried out by “terrorists who came on motorbikes”, another local source said, without elaborating.

Tillaberi is located in the flashpoint “tri-border” region between Niger, Mali and Burkina Faso, the site of frequent bloody attacks by jihadist groups.

Soldiers from the G5 Sahel force comprising Burkina Faso, Chad, Mali, Mauritania and Niger had been dispatched to Fantio and would “stay in the village for a few days at the request of the governor of the region”, a source close to the Tillaberi authorities told AFP.

Niger is struggling with both the spillover of Nigeria’s Boko Haram extremist movement in its southeast, and that of jihadists affiliated with the Islamic State group and Al-Qaeda in its west.

Jihadist attacks targeting civilians have multiplied since the start of the year with more than 300 people killed in three series of assaults against villages and camps in the west of the country.