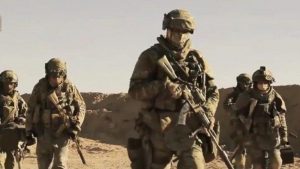 Five Russian mercenaries are believed to have been killed alongside 20 Mozambique servicemen in an ambush in the southeastern African nation, the independent Carta de Moçambique news outlet reported Tuesday.

The unconfirmed report comes a month after the reported arrival of 200 Russian mercenaries and three helicopters to help Mozambique’s government forces fight jihadists amid Moscow’s wider push for influence on the continent, according to The Moscow Times.

The Kremlin denied that it had deployed any government troops in Mozambique. “Five Russian members of the Wagner Group, which is helping the Mozambican government tackle violence in that area of the country, are … reported to have died,” Carta de Moçambique cited unnamed sources as saying.

African terrorism expert Jasmine Opperman added, citing emerging reports, that up to three army vehicles were burned in the attack. The Moscow Times was unable to independently confirm the reports. Neither Russia’s defense ministry nor Prigozhin’s company Concord have commented on the news at the time of publication. Mozambique’s ties to Russia date back to the 1960s, when the Soviet regime supported its Marxist-inspired party against Portugal’s colonial rule.

Under a bilateral agreement signed in 2018, Moscow agreed to send military advisers to Mozambique. As reported earlier, a CNN reporter said she was targeted by a Russian propaganda campaign following her exclusive report on the country’s activity in Africa and PMC Wagner. Previous reporting has established that Wagner chief Yevgeny Prigozhin’s companies have come to dominate Russian defense ministry contracting work and Prigozhin himself was sanctioned for his involvement in funding the Internet Research Agency that interfered in the 2016 presidential election in the United States. He has denied involvement with Wagner. Three Russian journalists were murdered in the Central African Republic a year ago while they were working on a story about Russian mercenaries.