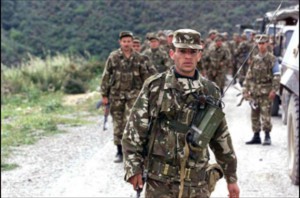 Algerian army killed two militants in an ongoing operation in the north of the country on Wednesday, adding the militants’ toll to five, according to the Defense Ministry.

Wednesday’s action was part of an underway operation, which was launched on Sunday, in the northern province of Tizi Ouzou, some 120 km east of the capital Algiers.

The army has since destroyed some 16 bunkers in the province that were used by armed militants to store weapons and ammunition, explosives, foodstuff and communication devices. Five militants have been killed in the operation.

Earlier on Monday, the army also discovered and destroyed 13 terrorist bunkers in the east of the nation.

A few militants, who are affiliated to AQIM and have recently established the IS-affiliate group of Caliphate Soldiers, are still taking refuge in the woods of central provinces.