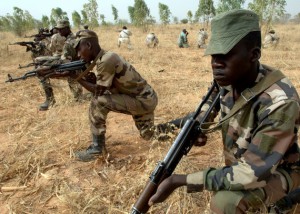 The attack occurred overnight Tuesday to Wednesday in the village of Koukodou near the Nigerian border in Niger’s Dosso region.

“The terrorists killed five villagers and burned houses and two vehicles,” said an army officer deployed to the region, who asked not to be named as he was not authorised to speak to the press.

A second officer said the raiders looted homes and shops before withdrawing back across the border into Nigeria.

Boko Haram, which is seeking to establish an Islamist emirate in northeast Nigeria, has killed thousands of people during a six-year insurgency, but attacks in Niger have been relatively rare.

The governor of Niger’s Diffa region ordered the evacuation of thousands of people living on islands on Lake Chad last week following a deadly attack there by Boko Haram militants late last month.

Around 25,700 island inhabitants had been evacuated by Thursday, according to the United Nations’ humanitarian coordination office OCHA, while another 6,000 Nigerians living there had returned to their home country.

A coalition including Nigeria and neighbouring countries Chad, Niger and Cameroon has recorded a string of significant military victories against the radical group in recent months.

Nigeria’s military has rescued hundreds of women and children who had been kidnapped by Boko Haram and were being detained in the Sambisa Forest, where the army is attempting defeat the group in one of its final strongholds.