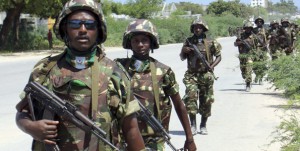 Five members of the Somali militant group Al-Shabaab were captured Wednesday in a joint security operation in Mogadishu, officials said.

The five, who are believed to have sneaked into the city with the intention of planning and causing terror attacks, were nabbed in hideouts in Hiliwa and Yaqshiid districts of the capital by Somalia National Army and the African Union backed force, AMISOM.

“We have been gathering intelligence about the five suspects and today the joint operation led to their capture. We sealed off the identified areas and a house-to-house search in the morning led us to the five suspects,” security ministry spokesman Mohamed Yusuf told media.

The spokesman also called on the public to be vigilant and report any suspicious persons to the authorities.

Police have intensified security in Mogadishu in the last few weeks following reports that Al-Shabaab had been planning attacks after last month’s attack at the education ministry headquarters which killed at least 20 people.