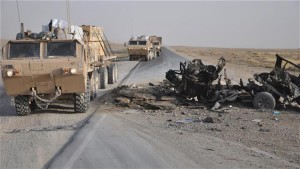 Five Afghan policemen on patrol in the eastern province of Paktia were killed when a roadside bomb exploded on Sunday.

Provincial police chief Zulmai Oryakhail said that the blast in Zurmat district in the troubled province bordering Pakistan hit a police vehicle on Saturday evening and killed all five officers on board.

The incident and death toll were confirmed by the provincial governor’s spokesman Naqib Ahmad Attal.

No group or individual immediately claimed responsibility but both officials blamed Taliban militants for the attack.