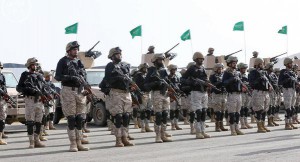 The first troops from Saudi Arabia’s National Guard have been deployed on the border with Yemen, official media said.

They will join members of the border guard and the army who have reinforced the frontier since March 26 when a Saudi-led coalition began airstrikes against Shiite Houthi rebels and their allies in Yemen.

The vanguard of National Guard troops “have arrived in Najran region to participate in the defense of the southern borders… so as to confront any possible threats,” the official Saudi Press Agency said.

Despite that declaration, the coalition has continued daily airstrikes in Yemen, where Iran-backed Houthi rebels are allied with army units loyal to former president Ali Abdullah Saleh.

They are fighting forces loyal to President Abed Rabbou Mansour Hadi, who has fled to Riyadh with members of his government.

A diplomatic source has told AFP the decision to deploy the National Guard was made the week prior to King Salman’s announcement.

The National Guard is led by Prince Miteb bin Abdullah.

It is formed from tribes which have traditionally backed the rule of the Saud dynasty since it spread its Sunni rule in the Arabian Peninsula.

With about 125,000 troops backed by armoured vehicles, the guard operates in parallel, and as a palace-directed counterbalance, to the Saudi army.

Eight Saudi soldiers and border guards were killed in armed skirmishes along the frontier during Operation Decisive Storm.

The United Nations says more than 1,000 people have been killed in fighting in Yemen since late March.