You are here: Home / Senza categoria / First RAAF strikes on Syria within a week 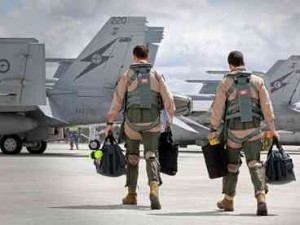 Australian combat aircraft could make their first strike on Islamic State forces in Syria within a week now the federal government has given the go-ahead.

Prime Minister Tony Abbott said after careful consideration of the request from US President Barack Obama the government decided to extend current air strikes against IS forces in Iraq to IS targets inside Syria.

“There can be no stability and no end to the persecution and suffering in the Middle East until the Daesh (IS) death cult is degraded and ultimately destroyed,” Mr Abbott told reporters in Canberra.

The prime minister said the IS group did not respect the borders of countries and its onslaught in Iraq was supported from bases in Syria.

“We cannot defeat Daesh in Iraq without defeating Daesh in Syria too,” he said, adding that, as evil as it was, troops loyal to the government of Syrian President Bashar al-Assad would not be targeted.

But Australians fighting for IS could be targeted.

“If people are fighting for Daesh, if they are working for the death cult and they come within the rules of engagement, well obviously they may well feel the force of our arms,” Mr Abbott said.

Australian combat aircraft – six F/A-18 Hornets, a Wedgetail airborne control aircraft and a KC-30A tanker – have been conducting missions over Iraq at the invitation of the Iraqi government since last October.

In that time they’ve conducted about 700 sorties, occasionally flying right up to the Syrian border.

“They just take a 10-degree left turn … and end up over Syria. There’s no major change to be able to do these operations,” he said.

Australia joins a growing coalition of countries whose aircraft conduct missions into Syria.

That includes Bahrain, Canada, Jordan, Saudi Arabia, Turkey, UAE and US. France will soon join in, while the UK is again seeking the approval from its MPs.

Opposition Leader Bill Shorten said Labor would support this extension of combat operations, subject to a number of conditions.

That includes an effective combat search and rescue capability to rescue any downed aircrew, a commitment to addressing the deepening humanitarian crisis, notification of the UN and the government outlining its long-term strategy for the changed role in a parliamentary debate.

“If the enemy is evil, which they are, even if the cause is just, which it is, our methods must be strategically, legally and morally sound,” Mr Shorten told parliament.

The Greens said there was no legal basis to the mission extension.

“When the first involvement was made in Iraq we said this will be a very slippery slope and you beware, because mission creep will occur and here it is. We have mission creep on a grand scale,” Greens leader Richard Di Natale told the Senate.