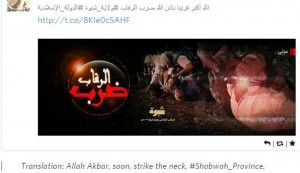 Following on from a declaration last week that ISIS had established a presence in war-torn Yemen, a group also affiliated with the network says it intends to post videos showing beheadings that have become the macabre trademark of the group.

Calling itself the “Shabwah Province” of “Slamic State”, and likely located in eastern Yemen, the affiliate released a video called “Strike their necks,” purporting to show beheadings, Vocative reports.

ISIS supporters on the group’s forum and on social media are promoting this video, promising its imminent release.

Recently social media users circulated videos and images of Yemeni soldiers being executed in the area of Shabwah, although it is unclear if they are the subjects of the upcoming release.

Supporters of the ISIS last week by publishing a nine minute video say they’ve declared a caliphate in the deserts of Yemen, the group calls itself Soldiers of the Caliphate in Yemen.but they call them “Sanaa Province” of “Islamic State”.