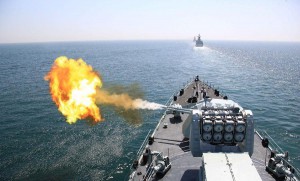 The drills are aimed at strengthening military cooperation between the two countries’ navies to promote security and stability at sea, according to the statement.

“Russian-Egyptian naval exercises ‘Friendship Bridge 2015’ will be held in the designated area of the Mediterranean Sea from June 6 to June 14, 2015.”

As part of the exercises, Russian and Egyptian warships, working with air support, are expected to protect shipping lanes from various threats and conduct live fire tactical training.In May, Russian-Chinese first ever naval drills were also held in the Mediterranean. The crews involved completed a wide range of tasks – from maneuvering to anti-submarine and radio-electronic warfare. The active phase of the Naval Cooperation 2015 joint exercises between the Russian and Chinese Navies ended on May 21.