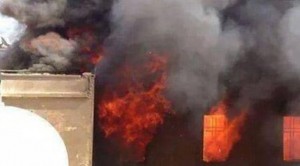 Iraqi media reported that mysterious fire devoured the empty headquarters of the ISIL terror group in the city of Mosul during the last 24 hours.

“The fire started 24 hours ago inside the empty headquarters of the ISIL in the city of Mosul,” Al Sumeriya reported.

The buildings were evacuated by the ISIL far before the launch of the battle to liberate Mosul and the perpetrators of the fire are still unknown.

Earlier, Nineveh Provincial Council announced that the ISIL militants detonated the buildings of the Mosul’s City Hall and the General Directorate of Nationality in Central Mosul using explosive barrels.

Meanwhile, the residents of Mosul discovered the ‘Land of Caliphate’ map inside one of the main headquarters of ISIL in Mosul.

Some residents of Mosul sneaked into one of ISIL security headquarters that was evacuated by the group earlier due to the intense air strikes and discovered a large map on a wall inside the archive room that titled as the Land of Caliphate Map.

Al Sumaria explained thtat the majority of the ISIL regions in the map were in the Persian Gulf countries, in addition to Egypt and the Maghreb area.