Twenty-six more pro-Daesh militants were wounded when Philippine soldiers shelled positions held by the rebels in southern Maguindanao province, the army said, adding, a soldier was slightly wounded in the fighting, like reported by trtworld.com 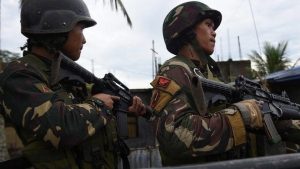 At least 44 pro-Daesh militants were killed and 26 more were wounded when Philippine soldiers shelled positions held by the rebels in southern Maguindanao province, the army said on Sunday.

The fighting, initially with about 50 members of the Bangsamoro Islamic Freedom Fighters (BIFF), broke out in a remote village in Datu Saudi Ampatuan town on Thursday morning and lasted the following day, said Lt Col Gerry Besana.

A soldier was slightly wounded, the army said in a separate statement.

The number of BIFF members killed and wounded was based on intelligence information, Besana said. The military did not recover any enemy bodies, he said.

Besana said the military launched artillery attacks with air support as the number of BIFF fighters had risen to about one hundred during the fighting.

The military classifies the BIFF, which it said has about 300 members, as a terrorist organisation, along with the Abu Sayyaf and Maute groups.

“Seventy were killed and injured (on the BIFF side), we are still pursuing about 200 more,” Besana said, adding that the clash had displaced about 500 families.

The militants in southern Philippines were regrouping, retraining and recruiting new members for another attack elsewhere after occupying the southern city of Marawi for five months last year, according to the army.