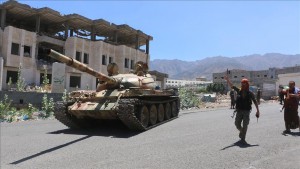 At least 46 people were killed in deadly clashes Monday between pro-government forces and Houthi rebels in Yemen’s central Taiz province.

Battles broke out in western Taiz, in which 25 Houthis and allied forces of former president Ali Abdullah Saleh were killed, the pro-government forces said in a statement.

“Fifteen pro-government forces were also killed in the violence,” it added.

Six Houthi rebels were also killed and four others injured in clashes with pro-government fighters west of Taiz city, a local source said anonymously due to restrictions on speaking to media.

The Houthi group does not often comment on its casualties.

Yemen has been ravaged by civil war since late 2014, when the Houthis and their allies overran capital Sanaa, forcing President Abd Rabbuh Mansour Hadi and his Saudi-backed government to temporarily flee to Riyadh.

The conflict escalated when Saudi Arabia and Arab allies launched in March of last year a massive military campaign in the country aimed at reversing Houthi gains and restoring Hadi’s embattled government.

Last week, the UN High Commissioner for Refugees (UNHCR) said that more than three million Yemenis have been displaced by the ongoing conflict in the Arab country.