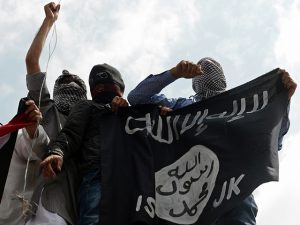 Islamic State stunned the world when its jihadist fighters swept through Iraq and Syria in 2014, conquering large chunks of territory. The proto-state it established in the two countries has collapsed, with the fall of the group’s major strongholds at the end of 2017. But completely defeating Islamic State and like-minded extremists is a larger challenge. The group has repeatedly shown that it can inspire terrorist attacks around the world without orchestrating them from a central headquarters. And like the jihadist group al-Qaeda before it, Islamic State has metastasized beyond its place of origin, with affiliates operating in other parts of the Mideast and in Africa and Asia, like reported by bloomberg.com.

The remaining Islamic State fighters have been pushed into an ever-smaller area along the Iraq-Syria border. They have been overcome by Syrian government forces backed by Russian airstrikes, Iranian-allied militias, Iraqi forces and Syrian rebels supported by a U.S.-led coalition. Islamic State lost control of its self-declared capital of Raqqa in Syria in October and of Mosul, its most important stronghold in Iraq, three months earlier. The U.S.-led operation against Islamic State, officially engaging more than 60 nations, combines airstrikes with support for local forces fighting the group on the ground. Under President Donald Trump, the U.S. has increased air strikes and delegated more authority to the commanders of its several thousand troops in Syria and Iraq. Russia began bombing Islamic State in 2015 in Syria, backing Syrian government forces. Even as Islamic State has lost terrain, it’s become a wider threat, launching or inspiring terrorist attacks in Europe, the U.S. and around the Muslim world. Affiliatesof the group have been declared in Nigeria, Libya, Algeria, Egypt, Saudi Arabia, Yemen, Afghanistan, Pakistan, Russia’s Caucasus region and the Philippines.

The group that eventually morphed into Islamic State was established in Iraq in 2004. It was originally an affiliate of al-Qaeda, the jihadist movement whose leaders the U.S. had driven from Afghanistan after they orchestrated the Sept. 11 attacks. The new group attracted Sunni Muslims rebelling against the occupation that followed the U.S.-led invasion of Iraq in 2003. When American forces toppled Saddam Hussein, the country’s Sunni minority lost the dominant role it had held in his dictatorial regime. Like al-Qaeda, which eventually disowned it, Islamic State aims to create a purified Islamic society, but its methods differ. It openly targets Muslim civilians, especially Shiites, whom it considers heretics, as well as fellow Sunnis who oppose it. Weakened in 2007 by a surge of U.S. troops combined with an organized Sunni backlash, the group revived with the 2011 departure of coalition forces. It honed its combat skills in the Syrian civil war that began the same year. In 2014, Islamic State began conquering Iraqi and Syrian cities and declared a caliphate, a state that claims dominion over all Muslims. Using the internet to recruit, it attracted tens of thousands of Muslims from all over the world as fighters in its cause. In the areas under its control, Islamic State practiced systematic violence — including abduction, sexual enslavement, torture and murder. A United Nations panel concluded it was guilty of genocide against the Yazidi minority.

The role of foreign powers in the effort to turn back Islamic State has fueled a debate about whether the intervention will breed resentment among Muslims that could backfire and drive recruitment for the group. Trump’s strategy produced a blunter use of force in Iraq and Syria that U.S. officials say accelerated the defeat of the caliphate. However it came at a cost: Reports of civilian deaths from coalition airstrikes in Iraq and Syria have risen significantly, beyond the increase in the strikes themselves. Critics say Trump’s approach could be laying the groundwork for the next crop of jihadists.