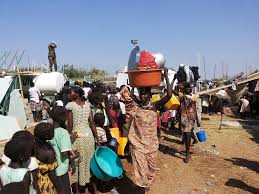 Officials said numerous people arrived in the capital, Wau from the Greater Besselia and Kpaile payams and sheltered in facilities like schools and clinics.

About 1, 300 people reportedly sheltered at Lokoloko in the western part of the city while 700 more have temporary settled at Tobi primary school. An additional 1,500 people have also reportedly camped at Kosti girl primary school located in Wau town.

“We are running away from Bessellia because government forces and rebels are fighting there while our homes are burns down by both arms,” said the mother of five children.

“Our villages are being shelled with heavy weapons and gunship on Saturday and Sunday bombed everywhere that is why we are running into the town for government protection to protect us from being use by the rebels as shelters, the rebels run into our areas while government forces continue perusing them inside our villages,” she added.

Okello appealed to government to provide them with enough food, water and medicines.

Michael Ngori, one of those who fled, said “The situation there in Pongo and Khor-Ghana is not good, we have really suffered beyond nothing, many people are killed this week”.

Both warring factions have accused the other of violating a permanent ceasefire signed in the wake of a peace deal inked by President Salva Kiir and rebel leader Riek Machar.

Tens of thousands were killed and nearly two million people displaced in South Sudan’s worst ever outbreak of violence since the young nation seceded from neighboring Sudan.