You are here: Home / Mediterranean / Fighting continues in Benghazi despite fall of Mreisa 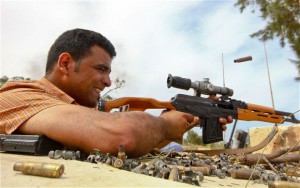 Fighting, mainly sniper fire and wildly targeted mortar shelling in Leithi, Sabri and Garyounis, continue despite advances by the Libyan National Army. On the past three days, according to Jalaa Hospital, it has received 22 injured and one dead, all Libya army fighters. Most, include the dead man, were involved in the Leithi fighting. Other were wounded in Sabri and Garyounis.

There are claims too that the LNA has finally taken the small south Benghazi harbour at Mresa, used to supply the Benghazi Revolutionaries Shoura Council forces with arms and fresh fighters, and ship out the wounded to Misrata. A source in 309 Brigade told the Libya Herald that when the area fell, an Islamist tired to escape Mreisa with his family. Finding his way blocked, he then surrendered himself, waving a white flag, and asking that no harm should come to his family.

According to the army source, the man was a Libyan.

Otherwise the city, like Tripoli, has been quiet in the past two days, apart from random rockets continuing to fall in certain areas.

However, three people are reported wounded as a result. One has been named as Ayyoub Wanis Hamad, 23, who was hit in Buhdeim area by shrapnel in his left leg. The others are Hamza Ali Faituri, aged 13, hit by shrapnel in his right hand in Hadaiq area, and Muhamed Ali Al-Jazhawi, also 13, who suffered a bullet in the head.