You are here: Home / MidEastGulf / Fighting between Islamic State and Nusra Front militants on outskirts of Arsal 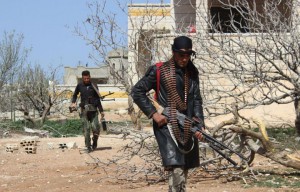 A series of tit-for-tat abductions was sparked between the Islamic State of Iraq and the Levant (ISIL) the al-Qaida-affiliate al-Nusra Front a day after clashes erupted between the two groups on the outskirts of the northeastern border town of Arsal.

Voice of Lebanon radio (93.3) reported on Tuesday that Syrian national Hussam Trad, an ISIL member, went missing in the outskirts of Arsal.

Security sources estimated that Trad was kidnapped in retaliation to the abduction of Ahmed Seifeddine on Monday.

Seifeddine, is also known as al-Silis.

Fighting broke out shortly after his abduction, where he was taken to the mountainous outskirts of Arsal.

The two groups have been clashing in the town’s outskirts for months now.

Despite ideological similarities, al-Nusra and the IS are opposed and in conflict with each other in parts of Syria, particularly in the north.

In August 2014, the two groups however joined forces and engaged in a deadly battle with the Lebanese army in and around Arsal. They eventually withdrew from the town, abducting dozens of troops and policemen.

Four hostages have been executed.