You are here: Home / West Asia / Fighting between Afghan forces and the Taliban kills dozens as peace talks continue 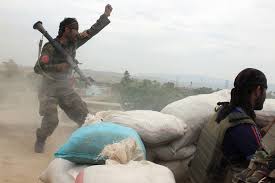 Fierce fighting between Afghan forces and the Taliban has killed dozens in a restive eastern province as negotiators from both sides pushed ahead with peace talks in Qatar, like reported by sbs.com.au.

He said at least 11 Afghan security personnel were killed in fighting in Hesarak, while eight pro-government militiamen were killed in another region.

Mr Khogyani said about 30 Taliban fighters died in the clashes – including some foreigners.

The hardline insurgent group has not commented on the fighting.

“There have been no attacks from our side… The enemies continue to attack and spill the blood of Afghans,” he said at a ceremony where US forces handed over four A-29 Super Tucano aircraft to the Afghan military.

Abdullah Abdullah, the head of the peace process for the Afghan government, said the ongoing talks offered an opportunity to end the war.

The two warring sides are at the negotiating table, a first in the three decades since the Taliban emerged as a movement across Afghanistan, Mr Abdullah said.

“We recognise the need to get together, to sit together, to present our views which are different from one another, but to find ways how to reconcile those differences,” Mr Abdullah told Doha-based Al-Jazeera TV in an interview released on Thursday.

He said negotiations aim to “find ways to be able (to) live together while maintaining some differences and fighting for it politically rather than through violence”.

In his speech at the opening session of the peace talks on Saturday, Mr Abdullah had called for an immediate humanitarian ceasefire, but his plea has gone unanswered.

The Taliban have long worried that reducing violence could lessen their leverage, but have implemented two temporary ceasefires this year itself.

Peace talks commenced on Saturday after months of delay over a contentious prisoner swap between the two sides.

The negotiations are a result of a deal between the Taliban and Washington signed in February, which also paved the way for withdrawing of all foreign forces by May next year.