You are here: Home / Mediterranean / Fighter jet shot down over Libya’s Benghazi 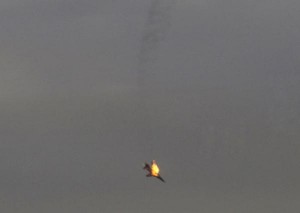 A fighter jet from Marshal Khalifa Haftar’s forces was shot down over Libya’s Benghazi on Sunday as it carried out raids on jihadist positions, a military source said to thepeninsulaqatar.com.

The MiG-23 went down after being targeted by “extremist militias”, said a commanding officer with Haftar’s forces.

The pilot ejected himself and survived unharmed, he said.

A source at the Benghazi airbase told the LANA news agency loyal to the parliament in Libya’s east backed by Haftar that a “heat-seeking missile” had hit the plane.

Haftar has managed to retake a large part of the eastern coastal city of Benghazi from jihadists since it came under their control in 2014.

But violent clashes have been ongoing for several weeks between his forces and jihadists surrounded in their last bastions, especially in the area of Qanfuda southwest of the city.

These jihadist groups include the Revolutionary Shura Council of Benghazi, an alliance of Islamist militias that includes the Al-Qaeda-linked Ansar Al-Sharia.