You are here: Home / MidEastGulf / Fight or leave for US$1500, Islamic State tell Hawija people 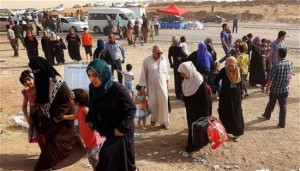 Islamic State militants in Kirkuk are telling people they have to choose between fighting security forces alongside the group or to leave after paying tolls, a local security source said to iraqinews.com .

The group deployed members of its Hisbah (vigilantism) service with megaphones in the group-held town of Hawija, southwest of the province, to announce the new rules, the source told Alsumaria News on Monday.

“The group is obliging whoever wants to leave to pay US$1500 per person or an equivalent amount in gold,” according to the source.

IS have been in control over the southern Kirkuk regions of Hawija, al-Zab and al-Riyadh since 2014, when the group emerged to proclaim the establishment of a so-called “Islamic Caliphate” at various Iraqi cities.

IS’s hardline, bloody governance, coupled with minimal subsistence and ongoing battles between the group and Iraqi government forces, have forced hundreds of thousands to flee regions occupied by the group to refugee camps, with the numbers of refugees standing at at least 191.000, according to a latest count by the government.

IS has sustained consecutive losses of personnel and ground since Iraqi government forces, backed by a U.S.-led coalition launched a major offensive to retake Mosul, the group’s biggest stronghold in Iraq.