You are here: Home / Mediterranean / Fight against terrorism in Tunisia: several arrested in Kasserine 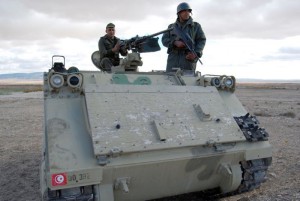 Several islamists who have a relation with the terrorists killed, Wednesday in the El Karma neighbourhood, were arrested Thursday by security and military forces in Kasserine, a security source said to TAP correspondent in the region.

A security campaign was launched in the El Karma and Ezzouhour neighbourhoods by military and security forces to hunt down terrorists, according to the same source.