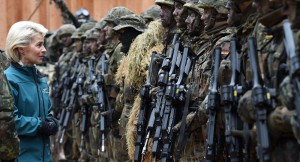 Germany’s defense minister says despite recent gains against the Islamic State group in Iraq, the fight is far from over.

Germany has been supplying Kurdish Peshmerga fighters with weapons and other equipment to fight the extremist group, and has 140 Bundeswehr troops stationed in Iraqi Kurdistan capital city of Erbil.

She said, “the terror is far from defeated; we’re all going to need a lot of patience.”

Barzani thanked Germany for the military support, saying it had helped change the situation at the front.

Von der Leyen said German military trainers will expand their training programmes for the Peshmerga forces and move closer to the frontlines to “save time and be more efficient,”

“Our training for the Peshmerga, that thus far has been basic, will enter a different phase. From Erbil where it is peaceful, we will go to those areas which are under the Peshmerga control closer to the frontlines. This will save time and make it more efficient,” von der Leyen said.

Germany has trained 10,000 Peshmerga fighters in the last two years, von der Leyen detailed, and has provided €90 million in military aid to the Kurdistan Region as part of “the common war against the Islamic State.”

She welcomed the recent agreement between Baghdad and Erbil to cooperate in the much anticipated Mosul offensive.

Von der Leyen added that she shares the view of Barzani that a plan for post-Mosul liberation is important to protect people in the liberated areas and prevent revenge attacks.

In July, Germany opened two military training centres near Erbil. The training centre German Village includes buildings, tunnel systems, and a river built on the training grounds to simulate real-life conditions the Peshmerga forces may face in combat, which “prepares Kurdish security forces for any kind of situation,” Colonel Frank Wasgindt, commander of the German contingent providing training in Kurdistan, said during the centre’s inauguration.

About 80 German soldiers are stationed in the Kurdistan Region to train the Peshmerga forces. Germany is one of the few countries supplying the Kurdish troops directly through Erbil and not through the Iraqi central government in Baghdad.

The German Defence Minister has arrived in Baghdad on Wednesday in an unannounced visit, to discuss the Mosul operation against Islamic State group.