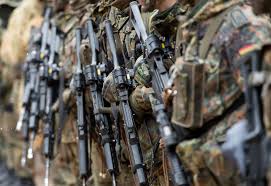 Germany is investigating up to 80 members of its armed forces, after its military intelligence agency found that a number of its enlisted soldiers held radical Islamic beliefs. Twenty have so far been identified, according to German media, while another 60 are under scrutiny, suspected of joining the army in order to receive training in weaponry and tactics.

The country’s Die Welt newspaper reported that its military counter-intelligence service Militärischer Abschirmdienst, (MAD) was actively monitoring the Bundeswehr. A spokesperson for the agency was quoted saying that it had received an undisclosed number of “individual inquiries from applicants who are interested in the service of the Bundeswehr in a striking manner”, and who “express a commitment of only a few months, and are expressly interested in intensive weapon and equipment training”.

Currently in Germany, it is illegal to make background checks on people until after they’ve started employment, but the country’s government is due to consider draft legislation to investigate all new military recruits to counter infiltration efforts by Islamic State.

A German defence ministry spokesperson said that the government wants to “respond adequately to the changed security situation and prevent the use of the Bundeswehr as a training facility for potential terrorists, extremists and trafficked persons”.

German security forces are on currently on high alert after Isis claimed responsibility for a series of terror attacks this year, in Würzburg, Ansbach, and Hamburg. The country is bearing the brunt of the migrant crisis, with 900,000 arriving and settling in the country last year alone. And although the German public has broadly been welcoming, certain concerns about security are arising.

In the past week, Berlin police said they arrested a Syrian man suspected of being a member of a terrorist organisation. Another refugee from Syria was detained in October after police found explosives in his flat. He has been accused of planning a major attack in the east German city.